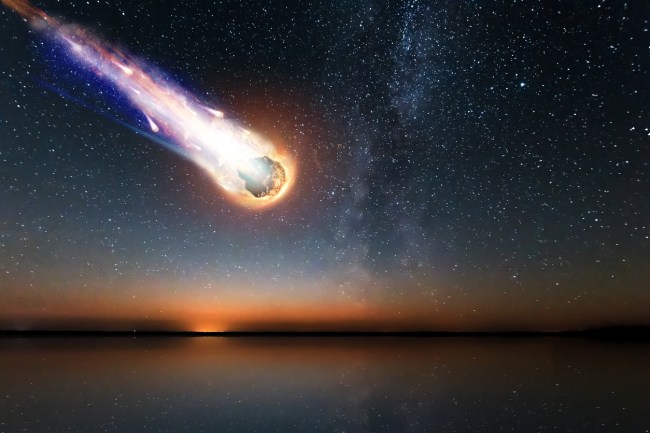 NASA is giving everyone plenty of time to prepare for a potential asteroid collision with the Earth. Astronomers have provided the exact date that a city-killer asteroid the size of the Great Pyramid of Giza could potentially smash into Earth.

Asteroid JF1 is heading towards our planet, and there is a slight chance that the space rock could collide with Earth. The asteroid has a diameter of over 420 feet or roughly the size of the Great Pyramid of Giza in Egypt.

At its current trajectory, JF1 would do a fly-by of Earth on May 6, 2022, which coincidentally is the release date of Black Panther 2.

There is a one in 3,800 chance the asteroid will hit Earth on that day, according to NASA. So you might want to hold off on buying your Black Panther 2 tickets until it is safe. If JF1 smashes into Earth, the impact will release 15 kilotons of TNT, which would be more than 15 times larger than the atomic bomb that decimated Hiroshima in 1945.

An asteroid of this size is classified as a “city-killer” because the space rock is large enough to pierce through the atmosphere without breaking up and obliterate an entire city. If the asteroid missed the land and splashed down in the ocean, it could unleash a powerful tsunami that could kill a large number of people.

Asteroid JF1 was first discovered in 2009 by NASA’s Jet Propulsion Laboratory. The space organization has been monitoring the asteroid closely ever since because of the potential impact with our planet.

NASA designated JF1 as a near-Earth object (NEO). NASA defines a NEO as “comets and asteroids that have been nudged by the gravitational attraction of nearby planets into orbits that allow them to enter the Earth’s neighborhood.

“If a comet’s or asteroid’s approach brings it to within 1.3 astronomical units of the Sun, we call it a Near-Earth object,” NASA explains.

You can see JF1’s orbit on NASA’s JPL website.

NASA has a program to scan the sky for NEO’s that have a decent chance of colliding into Earth. The Sentry: Earth Impact Monitoring is a “highly automated collision monitoring system that continually scans the most current asteroid catalog for possibilities of future impact with Earth over the next 100 years,” according to NASA.

Related Articles About Space and Asteroids:

New Asteroid Detected, Named The Fourth Most Dangerous To Hitting Earth According To The European Space Agency