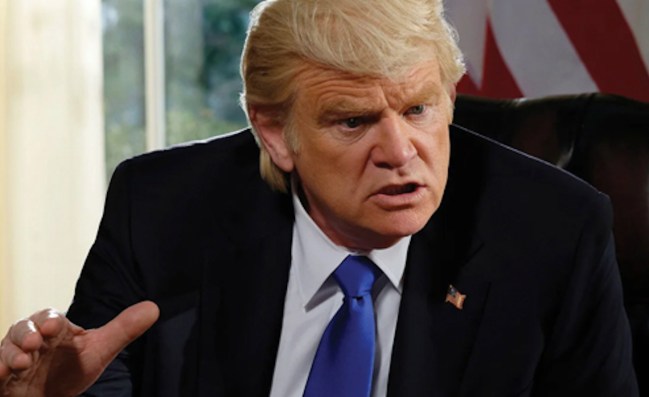 After first teasing the series with a vague silhouette image, Showtime has now released both the trailer for The Comey Rule and the first-look at Brendan Gleeson in full make-up and costume as President Donald Trump and it is.. a sight to behold.

The Comey Rule, which stars Gleeson as Donald Trump and Jeff Daniels as former FBI director James Comey, is based on Comey’s memoir A Higher Loyalty and on interviews that writer/director Billy Ray
“conducted with several of the figures portrayed in the miniseries.”

According to The Hollywood Reporter, The Comey Rule “gives a behind-the-headlines account of the events surrounding the 2016 election and its aftermath through the stories of Comey and Trump, whose strikingly different personalities, ethics, and loyalties put them on a collision course.”

The Comey Rule, which will consist of six episodes, will premiere on Showtime on September 27. Originally scheduled to be released closer to the election in November, Showtime ultimately decided to move the series up after writer and director Billy Ray spoke out against the decision in an email to the network, which was published by Deadline.

“We all were hoping to get this story in front of the American people months before the coming election. And that was a reasonable expectation considering that we’d been given a mandate by the network to do whatever was necessary to deliver by May 15,” Ray wrote.

“But at some point in March or April, that mandate changed. Word started drifting back to me that a decision about our airdate had been made at the very highest levels of Viacom: all talk of our airing before the election was suddenly a ‘non-starter.’

“I am deeply sorry that I didn’t win this one. You trusted me with your time and your talent, and you deserved better than this. Your performances were spectacular. Please know that I won’t give up; and that regardless of airdate I am thrilled at the prospect of showing the world your wonderful work.” [you can read the full letter over at Deadline]

Ray obviously got his wish, as Showtime is not only airing the series prior to the election, but it airing it so that the entire series will finish by the time the election rolls around on November 3.