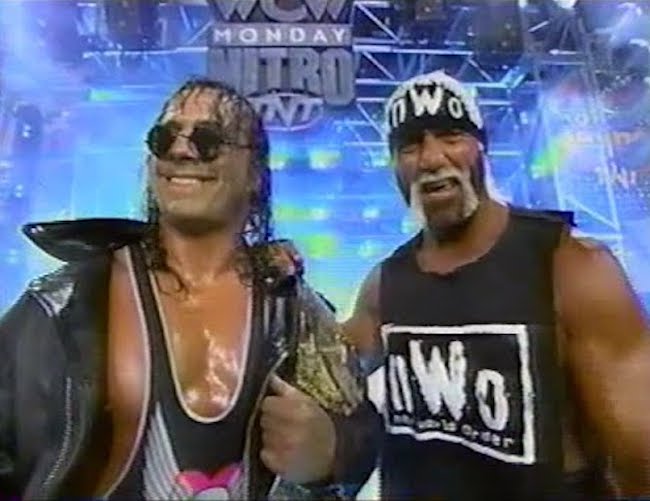 Bret Hart‘s new podcast – Confessions of the Hitman – is becoming a “must listen” for wrestling fans. Hart has never been a guy to pull any punches and always gives his honest opinion about other performers.

Hart has already done a deep dive into several different topics including Triple H and Shawn Michaels bullying a young “People’s Champion” and just how scary stalkers can get.

During a recent episode, Hart discussed his early experiences working with a green Hulk Hogan and how he tried to convince the blonde behemoth to spend some time training in the Hart family dungeon.

“I knew Hulk from Japan. I wrestled him in Atlanta, Georgia when I first started. I actually helped him a lot when he first started with wrestling. I worked with him every night. We’d wrestle for about 30 seconds and then I’d lose in a bear hug.

He didn’t know how to do anything!

I think at that time he could barely walk into the ring and he didn’t know how to hit the ropes or anything.

To be honest, we had to work harder and it made us better wrestlers.”

After making it to the WWF, Hart soon realized that while he was better at wrestling than Hogan, it was the promos making the Hulk the star.

“I remember Hogan would give me goosebumps up my arms when I’m sitting in the room listening to him about the pythons and the ‘let me tell you something, brother,’” Hart admits.

Finally, another top performer pulled the young Hitman aside and told him that his mic skills were just as important as his in-ring skills.

“A guy that helped me a lot with that department, like working to improve, I remember Roddy talking to me, ‘You’re a great wrestler, but you’ve got to learn to talk because you won’t ever make any money if you can’t talk.’ And I remember [responding], like, the wrestling is more important.’

To hear the entire interview, subscribe to Confessions of the Hitman.

[h/t to 411Mania for the transcription]

Matt Cardona Discusses Being A Heel In The Toy Collecting Community