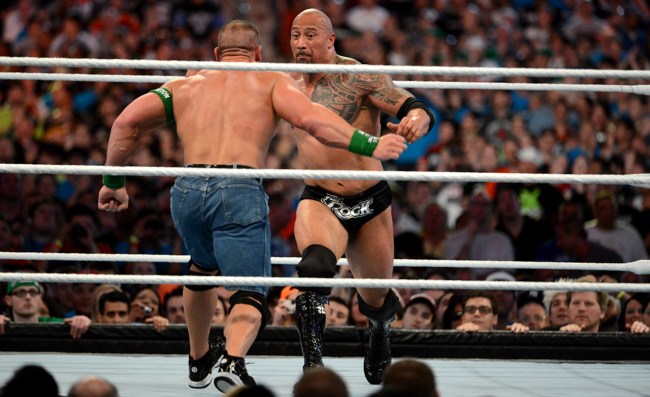 Hard to believe anyone could ever have bullied Dwayne “The Rock” Johnson, but according to WWE Hall of Famer Bret Hart it happened.

Hart recently revealed on episode 15 of Confessions of the Hitman that back when he was getting started in professional wrestling with the WWE in the 1990s The Rock got bullied by two other future Hall of Famers.

Quick aside… if you are a longtime wrestling fan, think back to the 1990s and take a wild guess which wrestlers you think would have been most likely to bully someone who was trying to take the spotlight away from them.

Here, let me give you a hint.

Didn’t see that coming, did you? Okay, back to The Hitman’s story, courtesy of Wrestling Inc.

“A lot of the wrestlers would give him a hard time in those days, a really hard time, enough to try to break him and get him to quit and they almost succeeded,” recalled Hart. “And I can remember going to bat for Dwayne quite a few times and kind of looking out for him, Owen too. I think Owen and I had a lot to do with sort of looking out for him when he first came down. [The Rock] was kind of a marked guy.”

Hart continued, “I don’t know why he had such a hard time being accepted by some of the more jerk-like wrestlers. A lot of the same guys who had a problem with Rock were the same guys that were all involved in the Screwjob with me, so I had the same dislike for the same petty bullsh*t that these guys were all about.”

“I remember Shawn Michaels coming into the dressing room and dressing down poor Dwayne,” Hart revealed. “Shawn came in and just dressed him down and he chewed him out. And I believe, [Michaels] told [The Rock] to never do a top rope dropkick ever again because that was his move. That’s what he was mad about. And then, he slammed the door and he walked out. The Rock was [deflated] because in those days, Shawn had a lot of weight. He was a pretty important guy for the company, a veteran guy kind of dressing him down like that, he was apologizing and said he didn’t know, and he thought it would be okay.

“I remember the door closed after Shawn left and I said, ‘that’s bullsh*t. That’s total bullsh*t.’ I said, ‘nobody owns the dropkick off the top. You can do that. Owen does it all the time! Why doesn’t he cut a promo on Owen?’ I said, ‘they’re just busting your chops and they’re trying to work on you.'”

Michaels, as any wrestling fan of the 1990s is well aware, was not alone in his willingness to tear someone else down in order keep his “spot.”

Hart also shared that, ironically, when he first came to the WWE it was The Rock’s dad Rocky Johnson who looked out for him. He also made sure to point out that The Rock wasn’t the only target of Michaels and Triple H’s bullying at that time.

“Just jealousy, and distinctly jealousy,” Hart continued. “Seeing someone that is a nice kid climbing the ladder bothered someone like Shawn Michaels or bothered Triple H so much that they couldn’t see past it. They worked on him and worked on him and it was pretty clear to me. And it wasn’t the only time they came in and made those types of scenes. They did that a few times, but I had a lot of clout at that time too, so I could go in and make him rebound and say, ‘don’t pay attention to that stuff, you didn’t do anything wrong’ because he was still green.”

Luckily, despite the bullying, The Rock somehow still managed to end up doing okay for himself.

The Rock tops the list for the second year in a row thanks to a $23.5 million check from Netflix for the upcoming film 'Red Notice' and his successful Under Armour line Project Rock pic.twitter.com/urHWXoOrwQ