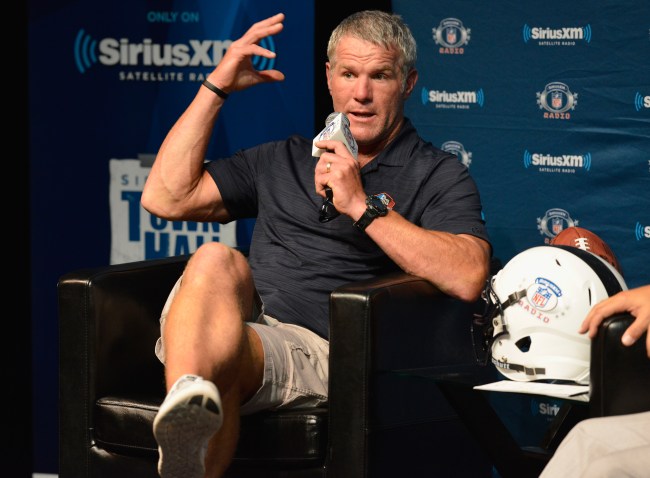 Without going down a rabbit hole talking about what happened at the U.S. Capitol Wednesday afternoon, let’s just all make a vow to be a little bit better in this country, OK? I’ll just leave it at that, because, wow, what a helluva past 12 months it’s been given all that’s gone on.

Amidst the craziness that we all witnessed, the Internet decided it needed to make some jokes. And after seeing a photo of a guy lounging in Speaker of the House Nancy Pelosi’s office chair during the entire thing, Twitter had a good time joking about the dude being none other than Hall of Fame quarterback Brett Favre — who, no doubt, looks eerily similar to the man in the now famous photo. Take a look at some of the reactions below.

Crazy that Brett Favre is shooting a Wrangler ad in the middle of this pic.twitter.com/F9RTPN7Vlr

Brett Favre is wild for this pic.twitter.com/4LnvMOt70R

I thought breaking into Nancy Pelosi’s office would be tough. That’s why I, Brett Favre, trusted Wrangler for— pic.twitter.com/h8MX5Lf4IJ

How many years in jail is Brett Favre lookalike getting? pic.twitter.com/STG9zTbrEw

Brett Favre has had such a strange post-NFL life https://t.co/bzVaNR3bf4

I mean, people on social media really joked about the former NFL quarterback filming one of his cheesy Wrangler Jeans commercials in Pelosi’s office. That’s some pretty savage stuff; and good for a laugh. Given Favre’s resemblance to the actual man in the photo — identified as Richard Barnett of Gravette, Arkanasas — it might be time for the Hall of Famer to dye his hair orange again; as he did during quarantine last March.

What if we told you that this interview involved an orange-haired Brett Favre talking about TikTok? pic.twitter.com/BO008pdFT1

Even in a time of wild chaos, Twitter always seems to find a way to add a little comedy to a situation. That said, let’s hope none of us have to live through the scene we saw at the U.S. Capitol Wednesday ever again, because some of the images and stories about the people involved are absolutely bonkers.