The Internet Wants To Know Why Area 51 Has Better Security Than The U.S. Capitol 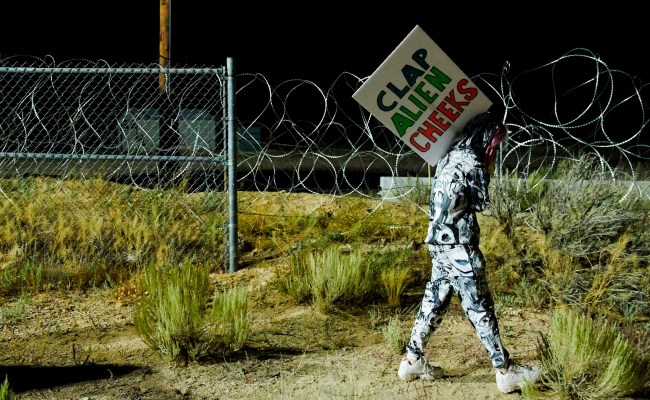 Remember how significant the response was by certain arms of the United States government when more than two million people said they were going to Storm Area 51, but only only around 75 people actually ended up at the base’s gate back in 2019?

The FBI showed up at the event creator’s door to make sure he wasn’t some sort of terrorist, the United States Air Force issued a very stern warning slash threat, and the United States Department of Defense threatened to bomb any event attendees if they came too close to the base. (The DoD later apologized.)

These government agencies were made aware of the potential for thousands of people showing up at Area 51 and were taking preparatory measures basically because it was so widely discussed on social media.

“If you are not prepared to use force to defend civilization, then be prepared to accept barbarism,” a member of the Red-State Secession Facebook group posted the day before the riot.

Guess what other event was widely discussed on social media before it happened? Wednesday’s riot at the United States Capitol.

Where were the warnings this time? What are they hiding?

It wasn’t so long ago that President Donald Trump proclaimed “when the looting starts the shooting starts” and that anyone who vandalizes any Federal building in America would be prosecuted and face a “MINIMUM TEN YEARS IN PRISON,” as he tweeted in late July 2020.

Sadly, the events of January 6, 2021 at the Capitol seemed to not have been taken nearly as seriously by law enforcement and government agencies as the rather obvious tongue-in-cheek threats to Storm Area 51 back in 2019.

This dichotomy was not lost on many folks on social media following the violent insurrection in D.C. on Tuesday.

i just realized something…
why does it feel like they protected Area 51 better than our own US Capitol???

WHAT EXACTLY ARE THEY HIDING pic.twitter.com/QO1B5jV3vY

so apparently this is all was organized through a facebook event called “occupy the capital” and i can’t help but think about when people jokingly made a “storm area 51 event” and the literal FBI showed up.

Me n the boys walking into Area 51 after seeing how well they defended the capital building. pic.twitter.com/6yLQpeZjQ5

Me and the boys going to Area 51 after seeing how easy it was to get in the capitol building pic.twitter.com/RX9TyhfW4E

this tells me we def could’ve stormed Area 51

the US the US
defending defending its
Area 51 own capitol pic.twitter.com/szCTIaYc3h

Society if everyone stormed Area 51 instead of the Capitol building pic.twitter.com/ZPrYiMO7Wd

How I’m sneak into Area 51 while the civil war is taking place
pic.twitter.com/KOk0DUjIad