The ‘Storm Area 51’ Raid Has Begun With A Naruto Run, Detainments And Some Very Interesting Signs 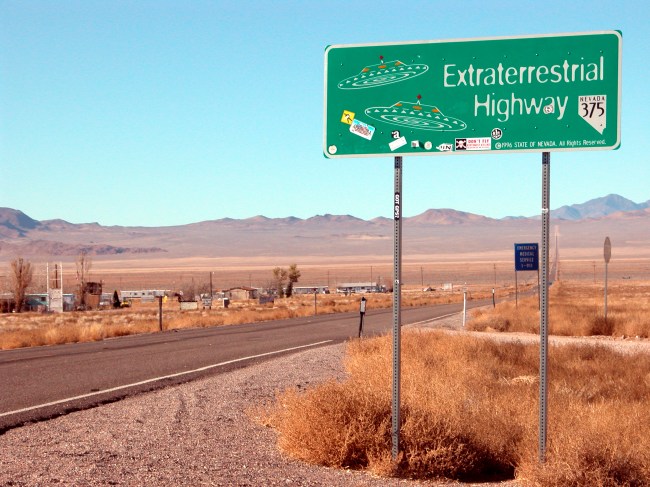 Happy Storm Area 51 Day to you and yours! Two months after the Storm Area 51, They Can’t Stop All of Us Facebook event page went viral, the alien-liberation raid is finally here!

The Alien Research Center has a new sign up greeting visitors and one that reads ‘I stormed Area 51’ ahead of Friday’s Area 51 Basecamp kickoff. #stormarea51 #area51 pic.twitter.com/uar7I84Zqf

Alien-hunters and people looking for any reason to party descended on a remote area in the Nevada desert to storm the highly-classified United States Air Force base, which has long rumored to house UFOs and possibly extraterrestrial lifeforms. Millions of people on Facebook said they were interested or were going to the Storm Area 51 event, but thus far there only seems to be a few hundred people in the area.

Here are a few of the many offsite camping spots in Rachel. #alienstock #area51 #stormarea51 pic.twitter.com/Oo2Xwi5JZr

Early Friday morning, approximately 75 people ventured to the gate of the USAF Nevada Test and Training Range according to CBS News. Two people were reportedly detained or arrested by sheriff’s deputies. A woman reportedly ducked under the gate to the military base and a man publicly urinated nearby the USAF facility.

Alien hunters arrive near Area 51 after an event on Facebook 'to see them aliens' is meant to happen today pic.twitter.com/ByuPbHrSwy

“If we Naruto run, we can move faster than their bullets. Let’s see them aliens,” the description of the event said on Facebook. “They can’t stop all of us.”

One of the Storm Area 51 participants was eager to show off his Naruto run, which is a running style of leaning forward with your head and arms behind you introduced by Japanese manga character Naruto Uzumaki.

The Area 51 Raid is underway and the Naruto run is in full effect 😂👽🛸pic.twitter.com/731rFUOT40

RELATED: Creator Of ‘Storm Area 51’ Facebook Event Had The FBI Show Up At His Front Door

The event has transformed from the original plan of invading the U.S. military base at Area 51 to liberate aliens into more of a Burning Man-esque festival.

The stage is being prepped at Area 51 Basecamp at the Alien Research Center in Hiko, where various events are planned including a performance by @pauloakenfold Friday. #area51 #area51basecamp #stormarea51 pic.twitter.com/OthfBwsLZ5

The crowd outside Area 51 held some interesting handmade signs including ones that read: “RAID THAT ALIEN BOOTY” and “CLAP ALIEN CHEEKS.”

The best thing about the raid so far are the signs #Area51storm pic.twitter.com/RuzzvRZjat

Outside the USAF base, there was a small crowd chanting “CLAP DEM CHEEKS!”

The roar of protesters chanting “Clap them cheeks! Clap them cheeks!” is surely unnerving #Area51 security. They need to open up the gates and allow entry before things get out of hand.pic.twitter.com/gwhj9Ss5Ps

The United States Air Force has already issued a warning to anyone who is contemplating infiltrating the Area 51 military base. “[Area 51] is an open training range for the U.S. Air Force, and we would discourage anyone from trying to come into the area where we train American armed forces,” Air Force spokeswoman Laura McAndrews said in July. “The U.S. Air Force always stands ready to protect America and its assets.”

Maybe don’t try to penetrate Area 51 in your quest to clap alien cheeks.