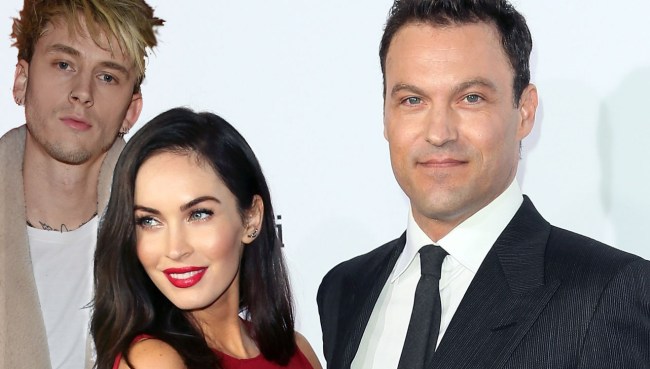 After a tumultuous 16 years together, Megan Fox and Brian Austin Green appear to have finally, officially called it quits. I am afraid to say this with 100 percent certainty, despite the fact that Fox, who is technically still married to BAG, is now dating Machine Gun Kelly.

THere’s good reason for this based on Fox and Green’s past history. Fox and BAG were engaged in November 2006, ended their engagement in February 2009, got re-engaged in June 2010, got married later that same month, Fox filed for divorce in August 2015, were back together in 2016, then she filed to dismiss the divorce in April 2019, and now neither of them are wearing their wedding rings. So, as you can see, nothing with these two is ever set in stone.

However, with Machine Gun Kelly publicly gushing about how hot Megan Fox’s feet are, and with them now posting photos of them wearing towels around their waists on Instagram, there is definitely a spark between the two.

“Waited for eternity to find you again,” MGK captioned a recent photo of the couple.

On Tuesday, Fox followed that up by captioning the aforementioned towel selfie, “Achingly Beautiful Boy… My heart is yours 🔪♥️🔪.”

Green has gone on record as saying he’s cool with his wife and MGK hooking up, telling the Hollywood Raw podcast, “I wish Megan the absolute best in everything. I want her to be completely happy, for her, for the kids. That’s super important.

He continued, “No one wants to be around somebody that’s unhappy, nothing good comes out of that. That’s a terrible situation. We are taking it day by day. This is insane, this happened at an unfortunate time that nobody could have predicted with quarantine and the virus and all of that. The news cycle is a bit bigger than we were prepared for. It is what it is.”

Apparently one way he is dealing with it is by trolling Fox with his own Instagram post of a slideshow showing his four sons, three of them with Fox, captioning it, “Achingly beautiful boys…… My heart is yours.”

Of course, since this is America in the year of our Lord 2020, numerous people were not happy with Green’s clapback, accusing him of “mommy shaming” Fox.

“Oh yes of course, a woman is not allowed to love anyone except her children 🙄🙄🙄,” wrote one commenter.

“As if a mother can love no one else but her children? Ugh please. 🙄,” commented another.

Can’t we all just get along?