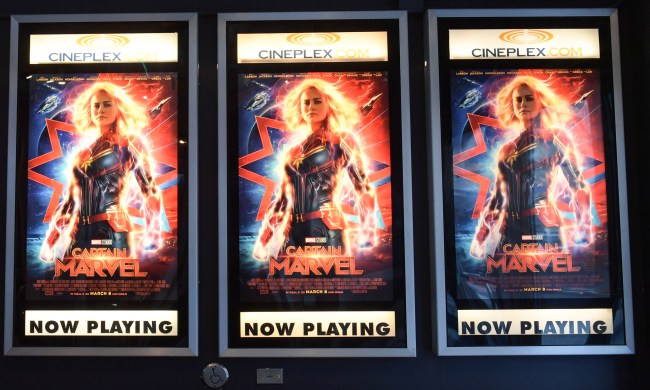 I went and saw Captain Marvel starring Brie Larson this weekend. It was a fine movie. Very enjoyable.

However, my movie-going experience sucked in comparison to some people who went to see Captain Marvel at the AMC theater in Clifton, New Jersey on Saturday night.

Well… this happened at the AMC theater in Clifton, New Jersey.

#CaptainMarvel herself, @brielarson, popped in to a few theaters on Saturday night to surprise fans on opening weekend! #HigherFurtherFaster pic.twitter.com/3hToHKTois

Yes, that is the 29-year-old star, Carol Danvers herdamnself, Brie Larson bumping around the cineplex, and telling those in attendance, “I just heard that I was on the cups and popcorn and I wanted to see for myself, so thank you so much for coming. You guys are so awesome to come opening weekend.”

Larson did a lot more than just say a quick hello to fans sitting in their seats though. She also worked the concession stand and posed for a bunch of pictures with fans.

Damn. I didn’t get an Academy Award winner with my bucket of popcorn this weekend.

Needless to say, people were very surprised by Larson’s appearance.

Honestly the fact that Brie Larson went to the theaters just to surprise fans on opening weekend speaks volume. She didn’t have to do this at all but she did. Also her smile with the girls. Again this is why rep is extremely important. Nothing but respect for my Captain Marvel 🌟 pic.twitter.com/2EO6e9a6Nf

Dope track suit, by the way.

Oh yeah, the movie? It raked in $455 million globally at the box office, the second-biggest opening ever for a superhero movie behind only Avengers: Infinity War.

Captain Marvel also had the sixth largest global opening overall of all-time, and at $153 million, it was the second-best debut ever for a new Marvel movie franchise in America behind Black Panther.

Cheers from Wakanda across the Marvel Universe to @brielarson for #CaptainMarvel this weekend! pic.twitter.com/FHPwNDnvYX