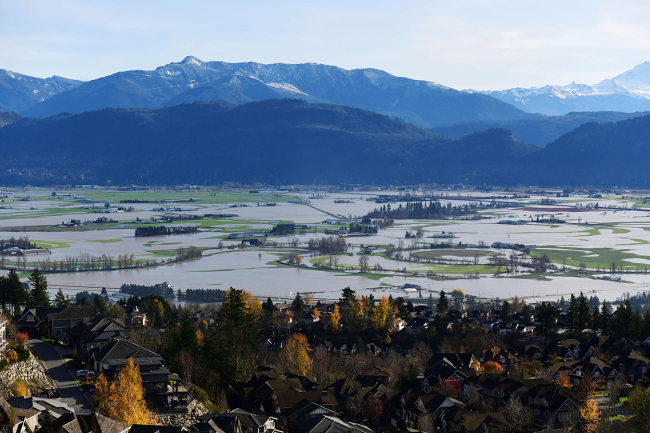 Farmers in British Columbia are working around the clock to save local livestock from devastating floods. Incredible videos show a community working together to lead cattle through neck-deep waters with jets skis and motorboats.

Earlier this week an atmospheric river hit the Pacific Northwest. In some areas, it dumped more than a month’s worth of rain in less than 72 hours. Much of the rain fell on areas that had been scarred by wildfires over the summer and the area is hurting.

RCMP's Air 1 Helicopter has provided a photo of the Sumas Prairie taken this morning. This is an example of the current conditions. pic.twitter.com/T4lvGyIUhm

However, from some of the biggest tragedies often come the most endearing stories of perseverance. Henry Braun, the mayor of Abbotsford agrees. But he also sees the tragedy and knows that his people cannot take care of this by themselves.

Here is what Braun had to say:

“When I see calves that are underwater that they rescued and threw in the boat to save them, on the one hand, it breaks my heart, but on the other hand, I’m just so impressed with our farming community,” he said to Globe and Mail. They’ve come together to help each other, and that’s what they’re doing. But we can’t handle this all by ourselves.”

Videos that have come out of the British Columbia area are incredible. They show local farmers coming together to help not only themselves, but their neighbors and fellow farmers. As the livestock tries to navigate the deep flood waters, the community has rallied jet skis and motorboats to rescue them.

Saw incredible grit in Abbotsford today, as farmers and community members rallied to rescue dozens of cattle stranded by #bcflood with boats, dinghies, a jet ski and even a hover craft. Heard these scenes were playing out across the valley.
Photographed for @reuterspictures: pic.twitter.com/B7azI3EeSs

As the efforts continue across the region, there is still a lot of work left to do. However, moments like are a reminder of what people are capable of when they come together for the good of a community.

If you want to help those affected by flooding in British Columbia, you can find a list of verified fundraisers HERE.