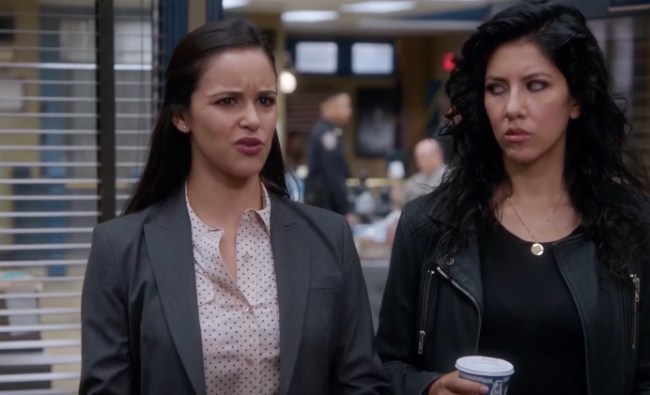 If you watch Brooklyn Nine-Nine on TV or follow any of the actors and actresses on Twitter you’ve undoubtedly noticed them chanting ‘NINE NINE’at some point by now. It’s their war cry to hype each other up during scenes that are improvised, and on Twitter, it’s their way to express #respect for something related to the show.

There were A LOT of ‘NINE NINE’ tweets after the show was canceled by FOX but NBC swooped in and saved the show within 24 hours (I’m STILL WAITING on someone to save The Last Man on Earth). It is pretty easy to see why ‘NINE NINE’ is the cast’s unofficial chant but it all had to start somewhere, right? Actress Melissa Fumero who plays Amy Santiago on Brooklyn Nine-Nine recently threw up a ’99’ tweet and when a fan commented on how they loved how the cast uses this chant in real life, Melissa Fumero then went on to explain the origins of this chant:

I love the fact they all say this irl https://t.co/jKMuP1ZwDC

Fun fact: @terrycrews was the first to start yelling NINE NINE! on set. Usually on Monday early mornings or on a late night shoot to pump us up. Then, they started writing it into the show. He is our cheerleader and we love him for it! https://t.co/qL4fNbD4cs

We yell it at home too. Not sure why. Started out as a joke, reference to the show, but has stuck.

Thinking about this Brooklyn Nine Nine situation has made me realise how important the show is. It’s not just a sitcom it’s a show about a family. And the chant of Nine Nine is more than just that. It’s a sign of the bond and closeness they have for one another.

I’d like to work on becoming that guy who yells ‘NINE NINE’ at inappropriate times and yells it very threateningly or angrily. Like when you are going through airport security and get randomly selected for a pat down so you just look the TSA agent in the eyes and yell ‘NINE NINE’ menacingly. Or when you see a co-worker trip and fall on their way back from the kitchen and spill their birthday cake everywhere. You point, laugh, and yell ‘NINE NINE’. These seem like times that are being neglected in the world of ‘NINE NINE’.