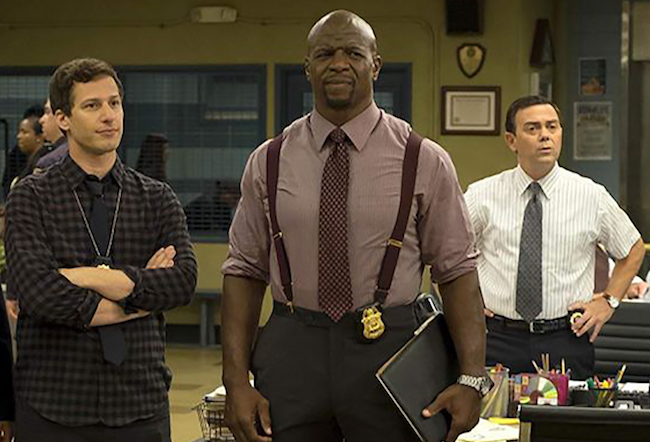 Brooklyn Nine-Nine is a fun and upbeat workplace comedy starring former Hot Rod goon Andy Samberg as an NYPD detective, and if you take the whole “police” thing out of the equation, it has essentially nothing in common with reality shows like Cops and Live PD (I guess they’ve all technically been canceled as well but I don’t see NBC swooping in to save the other two at any point in the near future).

Brooklyn Nine-Nine is currently gearing up to start shooting its eighth season, and while it may not be receiving as much scrutiny as Law and Order and other slightly heavier programs centered around fictional members of law enforcement, there are still some people out there who’ve started to take a closer look at how police are portrayed on the show.

Thankfully, no one in past seasons has run around in blackface or been promoting police brutality and it seems unlikely Samberg’s character will become the new Chase from Paw Patrol. However,  based on what the majestically chiseled Adonis who is Terry Crews had to say in a recent interview, the show isn’t immune from the recent shift in the political climate, as it had to start the new season completely from scratch in light of the events that have transpired in recent weeks:

“Our show-runner Dan Goor, they had four episodes all ready to go and they just threw them in the trash. We have to start over. Right now we don’t know which direction it’s going to go in…

We do know we’ve had a lot of somber talks about it and deep conversations and we hope through this we’re going to make something that will be truly groundbreaking this year. We have an opportunity and we plan to use it in the best way possible.”

Crews did not mention any specific reasons for why the episodes were flushed down the toilet but he has been trying to continue to open up a larger dialogue in a number of ways, including having conversations with his kids about racial injustice as well as discussions with the cast and crew of Brooklyn Nine-Nine. Stephanie Beatriz, who plays Rosa on the show, has spoken about Goor’s desire for inclusivity in the past, so while there’s no telling what direction it may go in, there’s little doubt it will retain that same spirit.

Silly little sitcoms might not be the leading force for change in the world but it is nice to see that some shows seem to be genuinely reflecting on how they can contribute. Sooooo many celebrities make incredibly insincere statements just to try to get on the world’s “good side,” but the Brooklyn Nine-Nine squad seems to really be working for something better. I’m cool with whatever changes they make to the show’s current environment as long as they keep making me laugh.