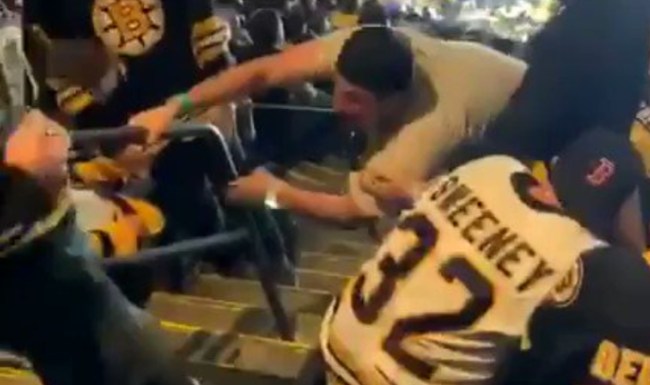 Boston Bruins fans were in a salty mood on Thursday night and that was even before their team lost. Bruins fanatics were so incandescent during Game 5 that they brawled with fellow Bruins fans. Even Boston fans hate Boston fans.

Official Kelly Sutherland will probably need surgery after he swallowed his whistle on several blown calls during Game 5 of the Stanley Cup Finals that allowed the St. Louis Blues to go on to the 2-1 victory. But even before that happened, Bruins fans were piping mad and ready to fight… each other.

While most sports fanbases generally fight fans of the other team, Boston is trying something new — fighting fans who root for the same team as you.

What starts out as a challenge to “take this outside” and some fingerpointing quickly escalates when one Bruins fan throws a $12 beer on another Bruins fan. It escalated quickly as a bald man rushing at the follower of the same team, tackling him and plummeting to the lower row. Then friends of the two men already fighting start their own brouhaha full of their own haymakers.

St. Louis Post-Dispatch columnist Benjamin Hochman posted a video of the Bruins brawl on Twitter. You have to appreciate the simple joy that once the brawl is in full-effect, Stone Cold’s theme music begins to play. *Chef’s kiss*

This was sent to me from the stands – this fight escalates … all between Bruins fans. pic.twitter.com/XPHEwdEBVF

Cue Gloria to these Bruins fans fighting each other pic.twitter.com/XYjMOY9YRs

Bruins fans did not particularly embrace the no-call on Tyler Bozak when he took out Noel Acciari in Boston’s defensive zone and displayed their displeasure by throwing trash onto the ice.

Bruins fans:
*Games not going the way we want it too*
Throw Trash and start fights!!!!!! pic.twitter.com/HiMPIJuPcw

After the disappointing loss, Bruins fans finally got it right and fought Blues fans and not fellow Bruins fans. Unfortunately for the Bruins fans, they lost that fight as well.

The St Louis Blues and Boston Bruins fans brawl it out inside the arena.#StanleyCup #StanleyCupFinals #stanleycupfinal2019 pic.twitter.com/BnIy2GQ3dJ

It was an all-around cruddy night for all Bruins fans.

Bruins fan flipping off the Blues as they leave the ice pic.twitter.com/foJnAoh6Gb