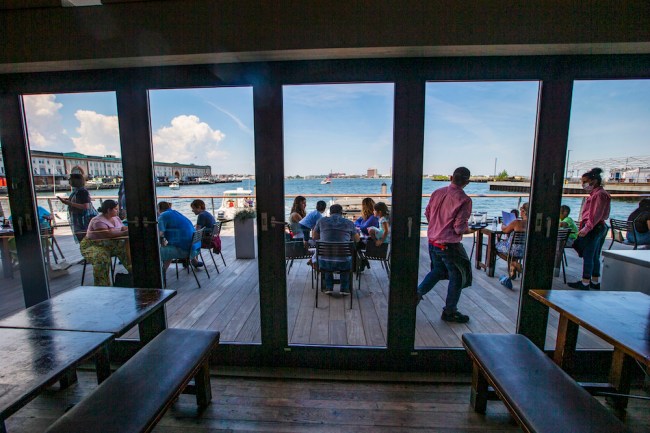 The Boston Globe via Getty Images

As of June 22, Massachusetts entered Step 2 Phase 2 of reopening procedures, which included indoor dining. Patios and outside dining is in full swing and restaurants are allowed to serve booze.

For the average bear, this means you can return to your favorite Friday night date spot, order that same entree, and feel like a normal human again. For the residents of South Boston, this means something much larger…the return of the brunch crowd.

It has been four long, brunchless months where our Sundays are simply the day before Monday, but the Southie Sunday Soldiers lay dormant no longer. Dust off that jean jacket and find your favorite pair of white pants because it’s time to celebrate the lord’s day with some prosecco.

I know brunch is a thing in all major cities, but there’s a different level of debauchery in Southie. For those picturing a ham & cheese omelet and a few casual mimosas, think again.

There’s a Saturday night type environment at all the major restaurants. Packed bars, live music…everyone seems to be in agreement that work is totally irrelevant on Mondays.

When I first moved here my friends and I did the full brunch day pretty much every weekend. Arrive around 11 am, eat, and then basically drink until dinner time.

The ultimate badge of honor is staying long enough to eat brunch and dinner at the same table.

Turns out that gets a little pricy, so experienced vets like myself now opt for the liquid diet starting around 2:00 PM and ending around 7:30. I kind of prefer it that way, not only because it’s cheaper, but because it’s much less of a production.

My version of brunch has, more or less, turned into going out for drinks on Sunday afternoons. Great way to prolong the weekend, bad way to prep for the workweek. Some people go to church on Sundays, some people take down a personal bottle of champagne. Funny how life works.

So I recently had my first sit down brunch in a long time. We went to Loco Taqueria & Oyster Bar – a popular Mexican restaurant in Southie.

Like many of the Southie restaurants, Loco has some makeshift outdoor seating, but since we had a reservation, we chose to sit inside…and thank god we did.

Apparently, the outdoor brunchers didn’t check the forecast because the skies opened up and they got absolutely dumped on. 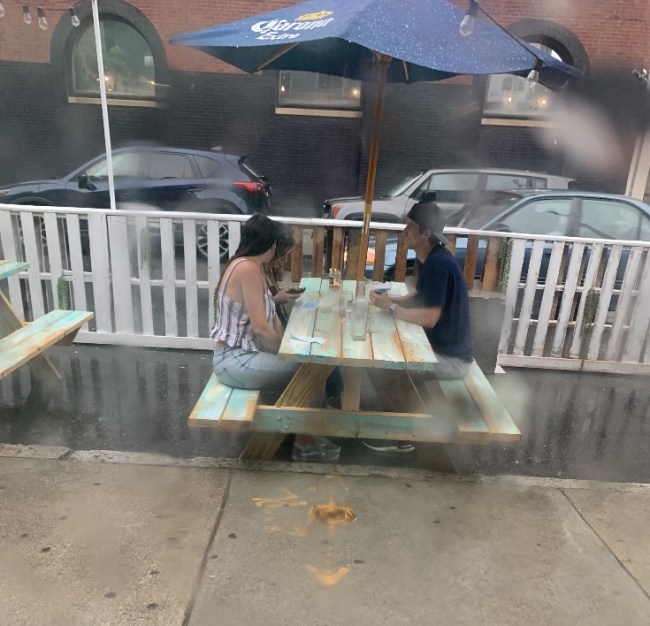 I couldn’t believe the number of people who stayed thru the rain – just casually enjoying their drinks as if they weren’t getting soaked. Are you immune to the rain??? Do you always dine in monsoons?

Overall it was a good brunch scene, given the limited capacity. Same rules as all the other restaurants. Wear a mask upon arrival, and when using the restroom.

Obviously, the restaurant didn’t have an elevated atmosphere of full capacity, but it was worth it to get out of the apartment for the day and feel somewhat normal. I took down a few margaritas and six oysters (I was feeling fancy…the superiority from looking on at the outdoor peasants in the rain went to my head).

Huge weekend for lakes, cookouts, and renting houses with friends. It’s always important to have at least one rich friend for weekends like the Fourth because they likely have some type of waterfront property. As they say, keep your friends close and your rich friends closer.

Although the reopening of bars and restaurants can be a tempting option for the holiday weekend, here’s why I went with an alternative option:

Historically, I’ll take a burger over a hotdog any day of the week, but on the Fourth of July, I flip that strategy upside down. I reserve one year’s worth of hot dog consumption for the Fourth of July, thus I don’t want to be anywhere that doesn’t serve hot dogs.

Beers are better at the beach

Doesn’t necessarily have to be the beach…really, just any body of water. If you’re not drinking beachside, poolside, or lakeside then you’re doing it wrong.

Show off the lawn

This is a HUGE weekend for all the dads to show off their months of work. A fairway-like lawn can separate a good party from a great party. All your cookout guests will secretly judge the quality of your lawn.

Unfortunately, I don’t have a “traditional” lawn at my apartment, but I covered my back deck in these and gave them a nice fresh sweep before the guests arrived. I didn’t receive any compliments, but I also didn’t receive any negative feedback so I’ll just assume everyone loved them.

Moral of the story, enjoy the reopening of indoor dining and bars. However, if you must go to one on the Fourth of July, ensure they provide Nathan’s Hotdogs, inflatable pools, and a fairway-like patch of fake grass.

(P.S. – I went to a bar on the Fifth of July (still technically the holiday weekend), but that was just to push off my hangover till Monday. I’ll let the public decide if this is a tale of returning to normalcy or mild alcoholism.)

Jed Kiley is a South Boston-based writer known for elite prose and deceptive quickness. Covers sports and entertainment. Reach out via Twitter.