Bryan Cranston Tells All About ‘El Camino’, From How It Made Him Feel To How It Was Filmed 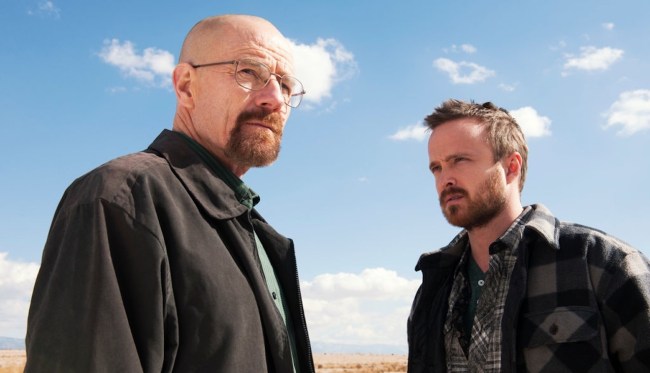 Just over six years after the iconic series went off the air, El Camino: A Breaking Bad Movie returned audiences to the sun and blood-soaked desert landscape of Albuquerque, Nex Mexico, to continue the story of Jesse Pinkman, the lovable stoner sidekick to meth kingpin Walter White.

Picking up mere moments after the 2013 series finale wrapped up, El Camino throws audiences right back into the beloved Breaking Bad universe as Jesse tries to flee from both the police and his demons.

Given the film’s proximity to the series’ main timeline (unlike the events of Better Call Saul), Jesse runs into a host of familiar faces, including Badger, Skinny Pete, Old Joe, Mike, Todd, Jane, and yes, even Walter White.

While it was no surprise to see the notorious Heisenberg pop up in El Camino — after all, it’d be plain weird to have a Breaking Bad movie without Walter White — it was certainly still a thrill for both the audience and the iconic actor who plays him to see the infamous meth chef again.

Speaking with Alan Sepinwall over at Rolling Stone, Bryan Cranston discussed how it felt to play the role that made him a nationally-known, award-winning star and the intense lengths the production crew went to keep his presence on set.

RS: How did you feel when Vince Gilligan told you he wanted you to play Walt again for this?

It was wonderful. I was really grateful that he thought of me to be a part of this. At the same time, I was wondering, “How the hell is that going to work?” I guessed it only could be retrospective, in flashback, and said, “OK, whatever he has to do.” And basically, that’s it. If Vince Gilligan called me and said, “I need you to wash my car,” I’d say, “How about this Saturday?” I would do anything for him, because I know he is so devoted to the integrity of the characters. He wouldn’t do this if it didn’t have a germane place in the storytelling.

RS: Production went to great lengths to keep your presence a secret. What did you have to do as part of that?

“First of all, keep my mouth shut. Literally, I had two days off, and we shot it this year, the first Monday and Tuesday of January, when my play [Network on Broadway] switched from eight shows a week, and having only one day off, Monday, to seven days, and having Monday and Tuesday off. We looked at that months and months before and said, “That’s my target date.” So I finished my matinee at 5 o’clock in the evening on Sunday and was whisked away to Teterboro [Airport, in New Jersey], put on a private jet, wheels up, land in Albuquerque with my wife, our transportation captain Dennis Milliken picked me up at the airport, no one saw me. I went right from the plane to the car to an Airbnb house they secured for me, almost like a Witness Protection situation. And there I stayed. I did not go out for the two days. But I did prod Aaron into opening his house for a party on Monday night, which was a beautiful night together. That was Monday, after we shot the restaurant scene, and then on Tuesday, I had just a bit of work to do in a hotel corridor, and that was it, I was back on a plane. No one saw me. In fact, going from my dressing room to makeup and makeup to the car, I was cloaked. I mean completely cloaked. I looked like someone from The Handmaid’s Tale. I couldn’t even see myself! It was all very secretive. And I’m glad. I think it’s nice for this to be a surprise for the fans of Breaking Bad.”

The entire interview with Cranston — who won the Emmy Award for Lead Actor in a Drama Series four times for his portrayal of Walter White — is worth the read, so head over to Rolling Stone if you want to check that out.