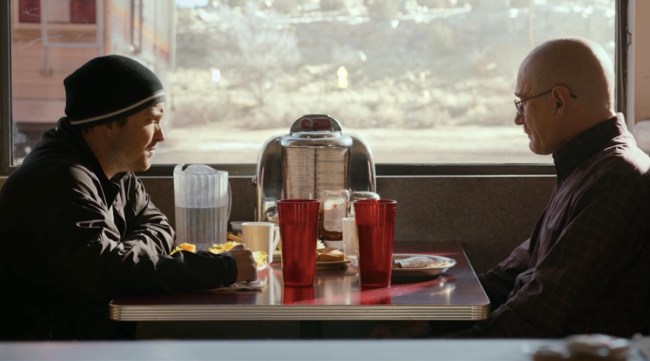 As everyone predicted — because, really, how could you make a Breaking Bad without him? — Walter White made an appearance in El Camino: A Breaking Bad Movie in the form of a bald-capped flashback.

In a flashback to a previously unseen season two moment, Walter White and his young protege Jesse — fresh off of a days-long cook marathon in the desert — are seen indulging in a massive diner breakfast after being stranded in the middle of nowhere for days on end.

One of the most emotionally affecting scenes in El Camino, the diner flashback gave fans a glimpse of the almost paternal yet comically strenuous relationship that Walt, way before truly became Heisenberg, had with Jesse. The scene also delivered what maybe Walter White’s final lines in the Breaking Bad universe, lines that gave fans further insight into the depths of Walt’s mind.

(Now, just to be clear: these are Walt’s last words to Jesse in terms of when we last see them, not in terms of chronology, as we know that this El Camino flashback takes place during Season 2)

“I’m glad you pointed that out because that resonated with me greatly and really helped me understand the frame of mind that Walter White was in at the time. When I read that script and read that line, I went, ‘Oh, wow. That’s where he is. That’s right.’ He was so filled with ennui when he was teaching to a classroom full of students who didn’t care, and he lost his spark, he lost his fire, his purpose. He lost his way. That was Walter White when we first met him.

And then, out of this extraordinary set of circumstances of his own impending demise, he makes this decision to do what he does and ironically finds greatness in it, finds fulfillment in it, even though he knew very well what he was doing was poisoning the world. It’s such an odd juxtaposition to imagine him reconciling that. But I do believe that every person on this planet is looking for their own personal empowerment. And that’s where Walter White found his — in the simple beauty and mathematical equation of chemistry.”

With the only loose end in the immediate Breaking Bad universe now tied up — the fate of Jesse Pinkman — it’s very possible that we’ve seen the last of Bryan Cranston as Walter White.