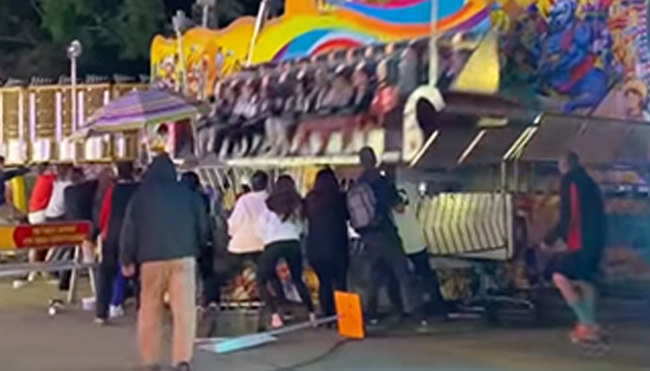 I can’t say I’m intimately familiar with the logistics of building a de facto amusement park in the middle of a field virtually overnight, but with that said, I think it’s safe to say the rides erected by traveling carnivals aren’t exactly the most shining examples of structural integrity.

Sure, I may not have thought twice about hopping aboard one to get my kicks when I was a kid, but now that I’m older and at least a tad wiser, the idea of riding a Ferris wheel precariously built atop a foundation of plywood and cinderblocks operated by the human embodiment of a pack of Marlboro Lights isn’t really my definition of “a good time.”

As a result, I didn’t really need any more reasons to avoid carnival rides. However, I got one courtesy of what unfolded at the National Cherry Festival in Traverse City, Michigan last week when attendees scrambled to prevent the Magic Carpet Ride from tipping over after it became dislodged.

The scary incident was filmed by a couple of spectators who apparently determined enough rescuers were already on the case, as multiple videos surfaced showing people descending on the structure to keep it upright. They were able to do so until the ride came to a stop, which allowed every person on board to walk away uninjured (aside from the mental scarring they’ll likely have to deal with).

BREAKING VIDEO: Carnival ride at a festival in #Michigan was tilting backward when bystanders rush to save people sitting on the ride. pic.twitter.com/FM1TaSj358

According to Today, a representative for the company in charge of the ride said it “came off the blocking” and added “Obviously there was a malfunction” in one of the most “Uh, Ya Think?” statements you’ll ever come across.