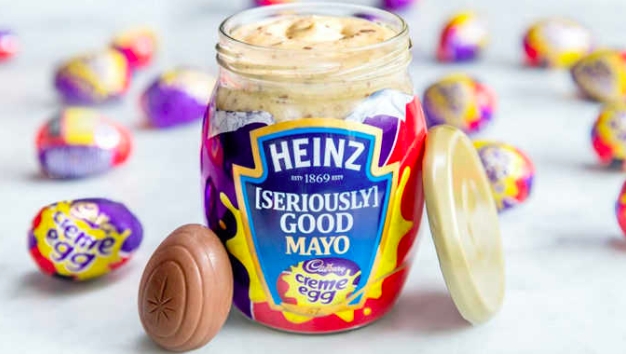 “Your scientists were so preoccupied with whether or not they could, they didn’t stop to think if they should.”
-Dr. Ian Malcolm, Jurassic Park

If you thought Infinity War was the most ambitious crossover event in history, you obviously haven’t caught wind of the folks at Cadbury teaming up with Heinz to turn one of the most overrated holiday candies in history into one of the most disgusting condiments packaged and sold to the general public: Cadbury Creme Egg-Flavored Mayonnaise.

Have I tried it? No. But I don’t need to try skinny dipping with my dad to know that it isn’t my cup of tea.

Heinz even had the gall to dub it ‘[Seriously] Good Mayo.’ Sure, I’ll take your word for it.

We weren’t kidding, Heinz Creme Egg Mayo is a thing! Who wants to try it?🙌 OF COURSE YOU DO! Come and see us at Ely’s Yard, Truman Brewery in London from 11th-13th April for free samples of this crazy combo. Only until stocks last! pic.twitter.com/3ZVehv0LJb

In a release, Heinz and Cadbury said the condiment was created “in a moment of taste bud tingling brilliance,” cites Today.

“It’s unlike anything you’ve ever tasted before,” said Heinz brand manager Martina Davis, “a true taste sensation! If everyone loves it as much as we do, then who knows, we might have to roll it out nationwide one day.”

On its surface, one may think that this is an American thing because we’re constantly fat shamed by the world, but the Cadbury Egg mayo has only been made available in the UK. It has been marketed as a spread for waffles and crumpets.

God damn, the British have zero culinary prowess, and that’s coming from a guy who eats hot dogs for dinner four nights a week.