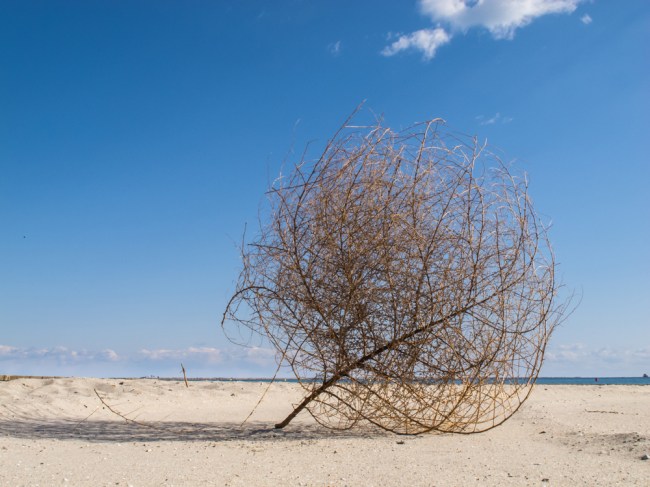 Residents of Victorville, California were under attack from the ferocious Movaje Desert winds recently. With those winds came the tumbleweeds, a literal metric shit ton of tumbleweeds.

There were so many tumbleweeds that some residents Victorville heard ominous scratching on their windows only to discover that the front doors to their homes had been blocked and they couldn’t escape. Some residents were only able to get out of their homes by using the garage door. Emergency rescue workers were called in to help clear the tumbleweeds because people were getting trapped in their homes. There are reports that 100 to 150 homes were affected by this massive infestation of tumbleweeds.

I saw headlines of this news story earlier and the week and thought to myself ‘no way it could be that bad’ and then I saw this video earlier this morning which shows just how many tumbleweeds there were in Victorville, and that’s when I realized this was a story worth sharing with you bros:

Growing up in Florida, the only time I ever saw a tumbleweed was in Wile E. Coyote and Roadrunner cartoons. I’m not overly familiar with them and don’t know if a massive congregation of tumbleweeds is something that happens every year when the Movaje Desert winds start roaring up to 50mph as they have been. But based on the response from emergency services I’m assuming this isn’t exactly a scenario that the fire department trains for and one that doesn’t happen on the regular.

For more on this story, you can visit the Victorville Daily Press and/or the L.A. Times.