In a few weeks, people across the United States will have to face the grim reality that football season is actually over and try to remember what they used to do on weekends before September rolled around.

Thankfully, there are still a few games left on the schedule and we’ll be treated to a couple of them on Sunday as the four remaining playoff teams attempt to earn the right to head to Atlanta and play in Super Bowl LIII.

If you’re one of the millions of people planning to spend seven straight hours watching football this weekend, you’re going to want to ensure you have all the fuel you need to repeatedly jump up from your couch and throw inanimate objects across the room when the occasion calls for it.

I recently got my Chopped on and whipped up a few dishes made with Campbell’s Chunky Soup to pair with last weekend’s slate of playoff games.

Now, I’m back by popular demand with some simple recipes you can whip up in around the same amount of time it takes for the refs to review your typical challenge.

For this one, you’ll need:

Nachos are a guaranteed crowd-pleaser and pretty easy to whip up but you still have to do a fair amount a prep work before putting everything together. However, Chunky Spicy Chicken Quesadilla Soup has everything you need— including chicken, corn, beans, and peppers.

It’s also got some cheese mixed in already, but if life has taught me anything, it’s that there’s no such thing as too much cheese. As a result, we’re going to throw half of the bag on top of a pile of tortilla chips while waiting for the soup to warm up over medium heat for a few minutes.

Once it’s simmering, all you have to do is pour the soup out over the tray before covering everything with the rest of the cheese. Let heat do its thing for a minute before digging into the melty, crunchy goodness.

Grab some tortillas and make some quesadillas by combining Campbell’s Chunky Spicy Quesadilla Soup with cheese for the filling. 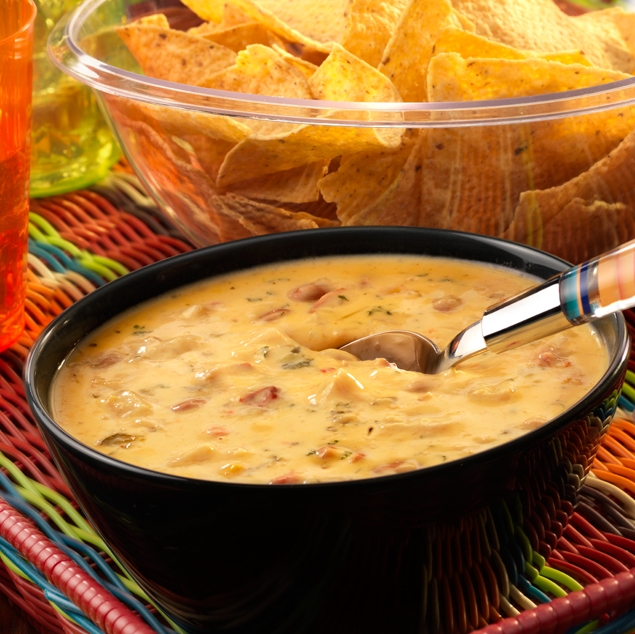 If you want to make this, you’ll have to pick up:

I find it virtually impossible to resist the urge to order queso dip whenever I see it on a menu, and if you’re in the same position as I am, this dish has you covered for game day.

Throw the Chipotle Chicken & Corn Chowder into an appropriately-sized saucepan over medium heat for a couple of minutes. As it warms up, dice the cheese and throw it in with the soup, stirring occasionally (it should take about three minutes to melt).

If you’re in the mood for cilantro, toss it in once the mixture on the stove has come together. Pour it into a bowl, bust out the chips, and proceed to get your queso on.