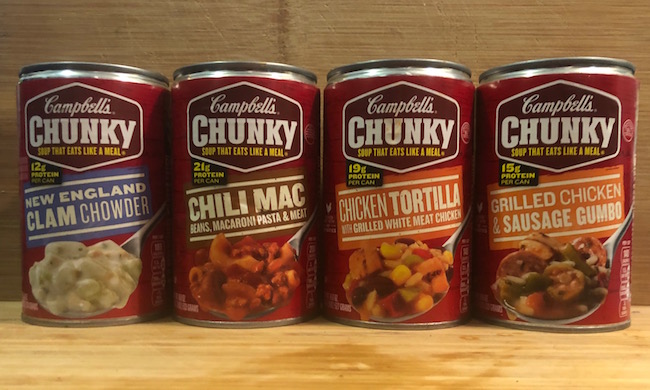 The NFL was nice enough to treat us to a solid slate of playoff games this weekend as the eight remaining teams fight for the right to take home the Lombardi Trophy (and, in turn, party).

Plenty of people will get their tailgate on this weekend, but even if you’re not posting up in a parking lot, you’re still going to want to have a sizeable spread of food to keep you fueled during the games.

I finally got the chance to experience what it’s like to be a contestant on Chopped thanks to Campbell’s, who challenged me to come up with a few creative meal hacks harnessing the power of Chunky Soup to pair with each one of this weekend’s NFL playoff showdowns.

If you’re looking for something hearty for your party then these dishes are all you need. 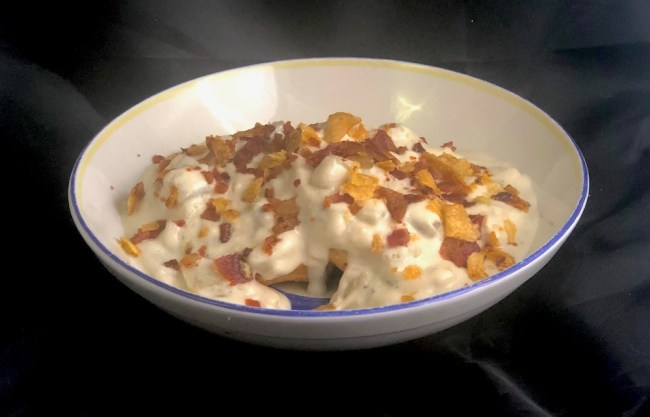 The Patriots are playing the Chargers this weekend so I sincerely hope I don’t need to tell you why I decided to go with New England Clam Chowder for the base of this dish.

In most cases, chowder is served with oyster crackers but they’re not exactly the most filling things in the world. As a result, I decided to cook up some biscuits, which kind of look like giant oyster crackers— a detail I hope the judges on Chopped would appreciate. 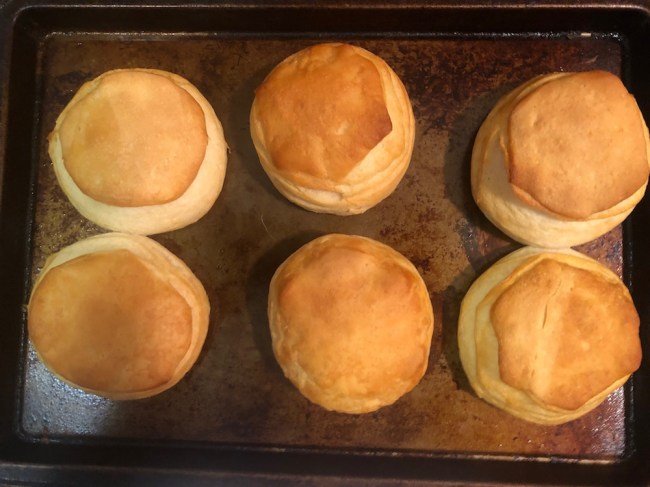 Once the biscuits are cooked, put the chowder in a saucepan over low heat and set the oven to 425°.

Fry up the bacon over medium until it’s extra crispy (this should take around 10 minutes). 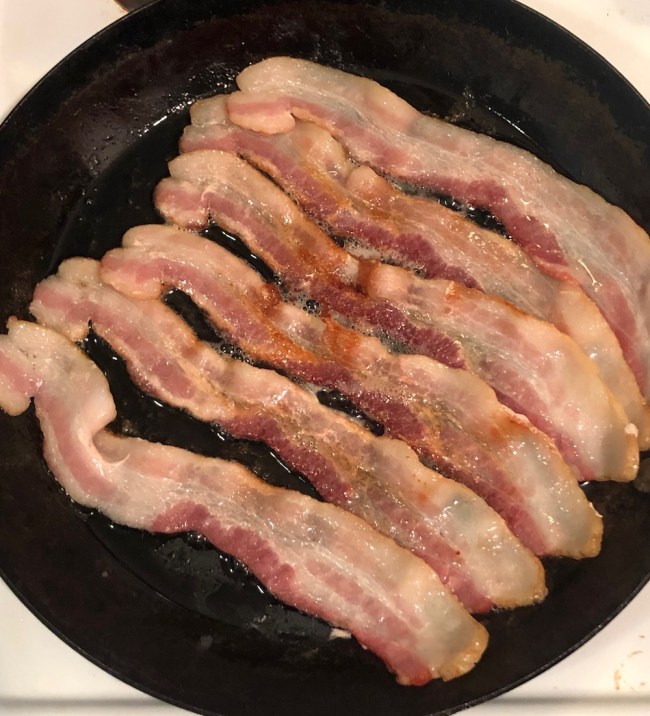 Once the strips have cooled down, chop them into fine bits.

Spread the potato chips out on a baking sheet and coat them evenly in maple syrup before putting them into the oven. Cook until the syrup begins to caramelize, which should begin around the four-minute mark. Keep a close eye on them to make sure the syrup doesn’t burn. 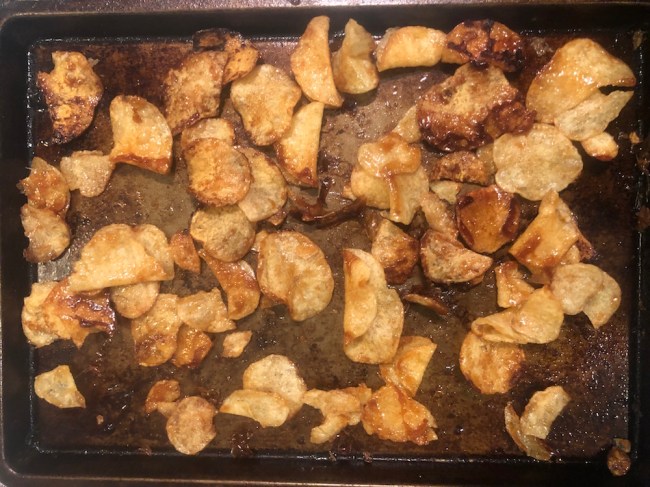 When everything is ready, split a biscuit in half and stack it to get extra points for presentation. 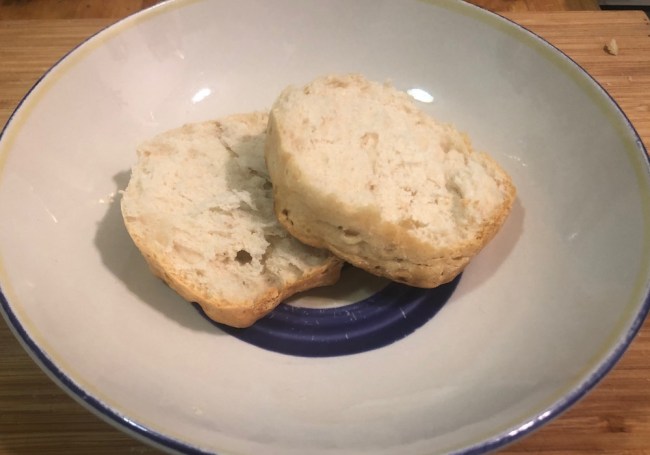 Cover the biscuit in as much chowder as you please before topping it with copious amounts of bacon bits and crushed maple potato chips.

Your taste buds can thank me later. 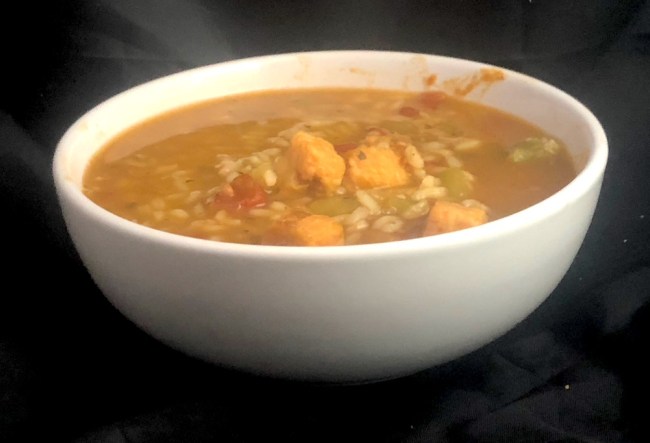 I’m a huge fan of Cajun cuisine so I decided to pay tribute to the city of New Orleans by combining a classic Louisiana dish with  Campbell’s Chunky Grilled Chicken and Sausage Gumbo for the Saints-Eagles game.

Cajun food is based on a “holy trinity” of onion, bell pepper, and celery, which should be cooked together in a large, oiled skillet over medium-high heat until soft (around five to seven minutes).

Be sure to stir occasionally. 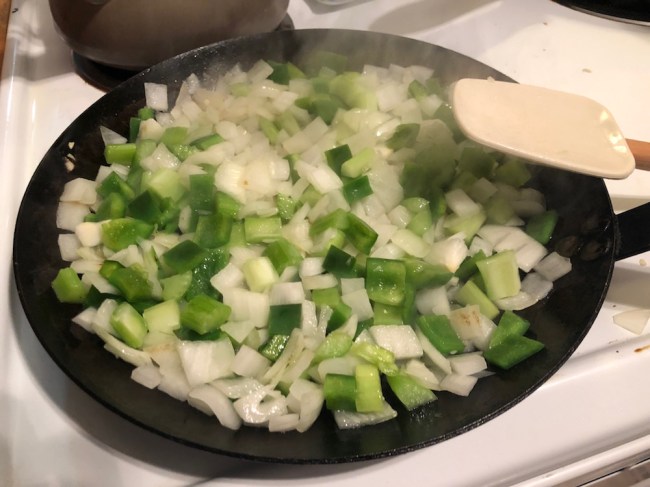 When the vegetables have cooked down a bit, add the garlic, seasoning, salt, and pepper. Stir frequently and cook for an additional minute or two before adding the tomatoes, beans, and water. 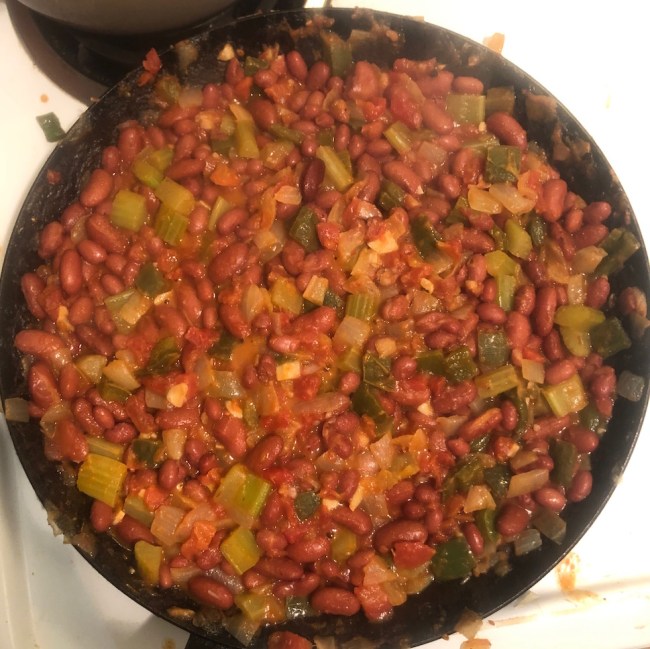 Allow the mixture to come to a hard simmer before turning down the heat to medium-low and let it bubble until thickened, which should take between 10 and 15 minutes. Again, stirring is your friend here.

As the beans simmer, heat up the Grilled Chicken and Sausage Gumbo in a saucepan over low heat. When the liquid in the skillet has entirely evaporated, put the beans in a bowl and smother them with the soup.

Welcome to the bayou. 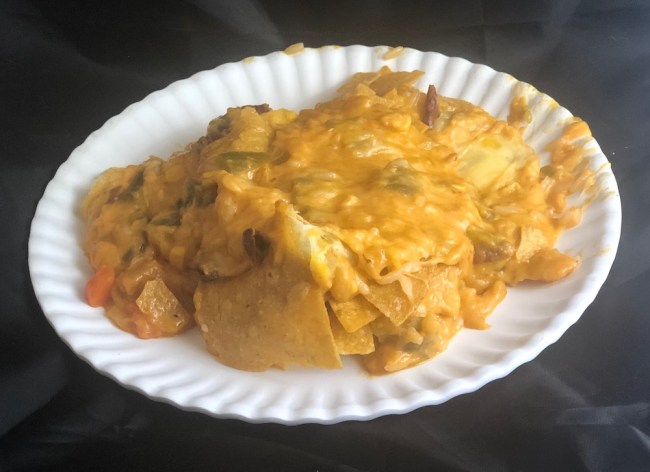 *Note: Resist the temptation to use pre-shredded cheese, as it won’t melt properly

I decided to go with a Tex-Mex theme for the matchup between the Cowboys and the Rams and no party food pairs better with this game than some ‘chos.

If you’re looking for something cheesy and delicious, then this is the dish for you.

Start by preheating your oven to 350° and put the soup in a saucepan on the stove over medium-low heat in the meantime. Allow it to simmer and reduce for approximately 20 minutes, stirring occasionally.

Once the soup has thickened, finely shred the cheeses and mix them together. Put half of the resulting combo into the saucepan. 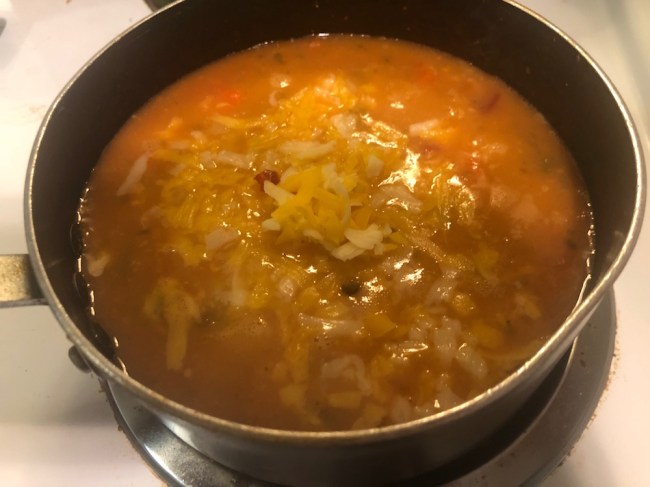 Stir consistently until the cheese begins to melt, which shouldn’t take more than five minutes. During the process, take a brief break from stirring to evenly distribute the chips across a baking sheet and sprinkle the other half of the cheese over the top. 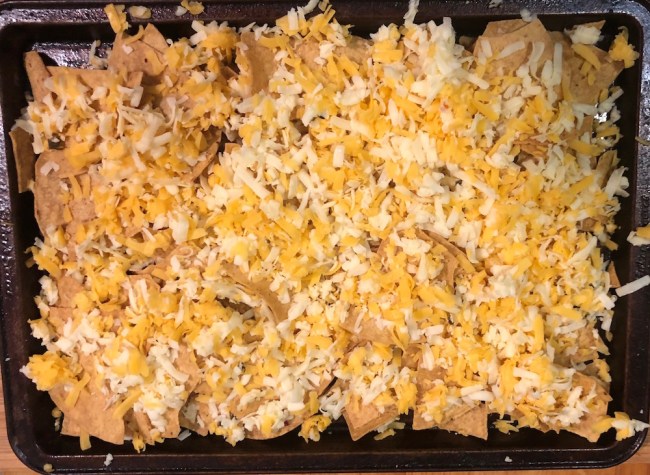 Once that’s done, bake them in the oven for eight minutes.

While the chips cook, drain the can of pickled jalapeños; presliced is ideal but you can always dice up the unchopped version if necessary. Add them to the saucepan and continue stirring as everyone gets to know each other in the pot.

After eight minutes, the cheese on the chips should have started to bubble. Once it reaches that point, turn the oven off but keep the food inside. If the concoction on the stove hasn’t reached a smooth consistency by now continue stirring until everything is entirely incorporated.

It should look something like this when everything is said and done. 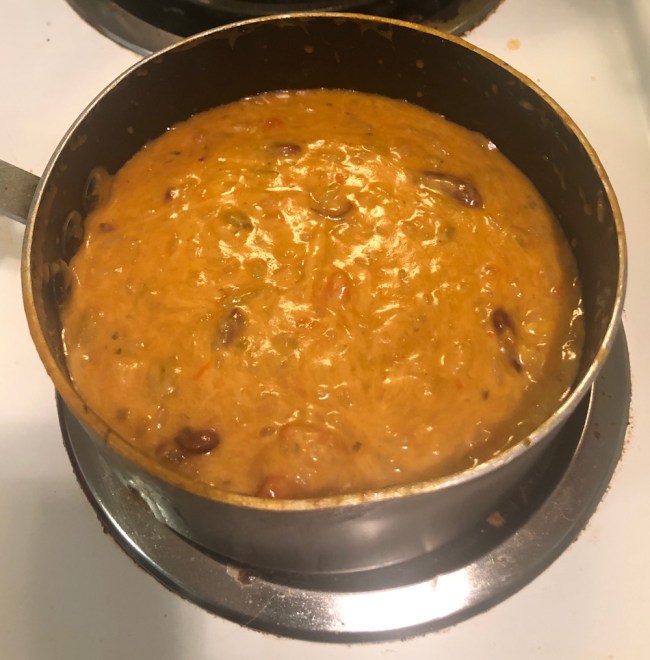 Once the cheese-soup mixture reaches your desired thickness, take out the chips and cover them in your beautiful creation. 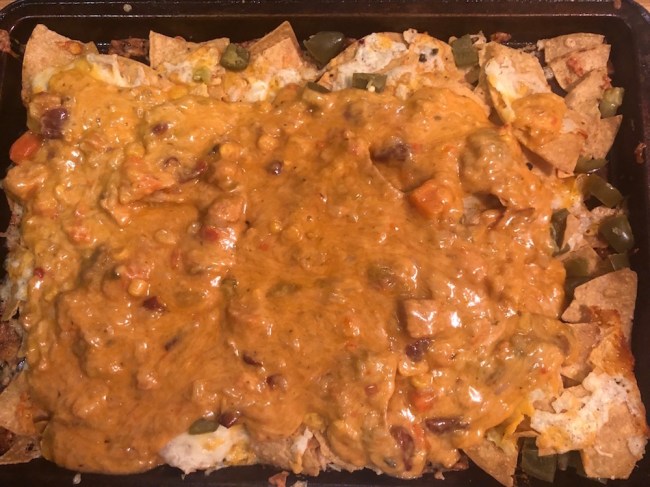 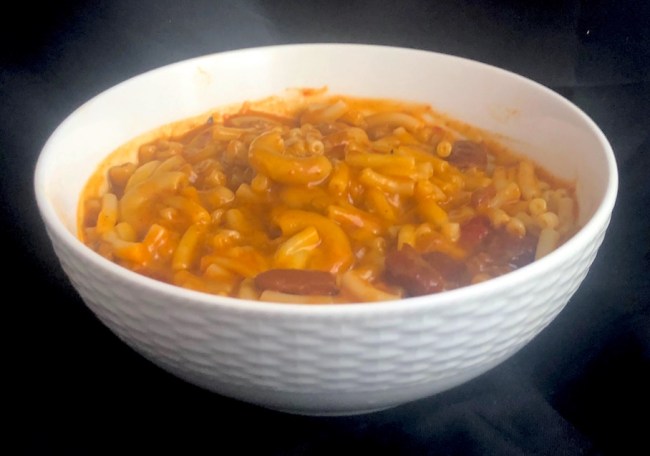 Indianapolis doesn’t really have a vibrant food scene— at least that I’m aware of— so I turned to Kansas City for inspiration and created my own simple version of the ultimate BBQ side dish. 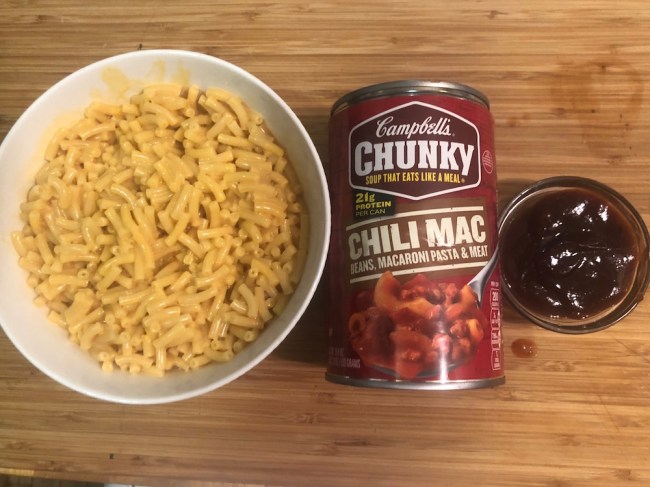 The region’s signature sauce relies on tomato for its flavor, so if you’re looking for maximum authenticity, keep an eye out for any bottles with “Kansas City” on the label. With that said, your standard BBQ sauce will be more than up to snuff.

Heat the soup over low while cooking the mac and cheese by following the instructions on the box (I believe in you). Add the BBQ sauce to the soup, stir to incorporate, and pour over the noodles.