Can You Pass A Drug Test With Animal Urine? 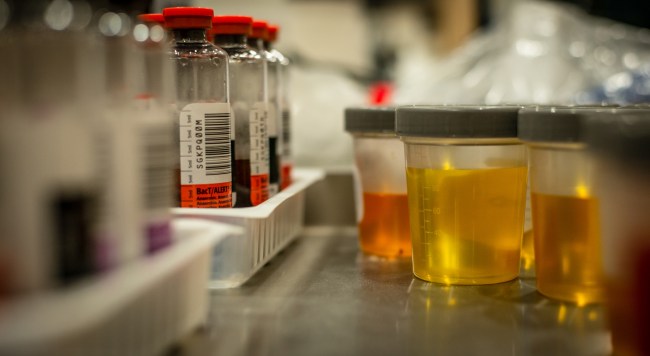 People employ all sorts of bat shit crazy tactics in hopes of passing a drug test. This urgent situation usually begins with a phone call from the human resources department at that one company they’ve been trying to get a job with for the past month. It’s the one that pays about five bucks more an hour than what they’re earning now, and there are no weekend shifts. “Everything looks good on your application,” says the person on the other end of the line. “All we need you to do now is pass a drug test, and you’re all set.” Oh, sheeeeeeiiiiiiiit. Welp, that could be a problem.

In the back of their mind, they’re thinking, “you know, I probably shouldn’t have spent the entire weekend smoking so much dope.” Jesus, you think? Without something resembling a wing and a prayer, any poor bastard in this position is destined to fail a drug test long before they can ever get their pants unzipped. And they know it, too. It’s the reason that some of the most desperate of the breed try everything in their power to clean out their systems before they are handed the proverbial cup of doom. Some have been known to drink bleach, deadly amounts of water, and even walk into the place with a fake wiener loaded up with synthetic urine.

There is even a bizarre, new trend connected to all of this whiz quiz business that has some of us a bit flabbergasted. It seems drug users are trying to pull a fast one over on lab technicians by submitting the piddle of animals instead of their own. The logic behind this method, at least as far as we can tell, is that since it isn’t typical for animals to be hardcore drug abusers, their urine is the perfect cover for stoners, pill poppers and speed freaks. This strategy, however, isn’t exactly working out for the best. In fact, a Kentucky woman is sitting in jail right now because she tried it.

A story in the New York Post claims that 40-year-old Julie Miller showed up to the Pineville Police Department in December for a probation visit. These are the kinds of meetings where a smug cop asks a drug offender if they have been staying out of trouble and then watches them take a squirt. Little did they know, but Miller, perhaps after scouring the Internet for the quickest ways to pass a drug test, handed them the urinary offerings of her family dog. Her con job was working, too, until the lab came back and said the sample contained a smidge more kibble than anything human. That’s when deep shit trouble erupted, and Miller was kenneled soon after.

Listen, kids, you cannot pass a drug test with animal urine. Anyone who tells you that this can be done is just another idiot who has bought into a myth. It’s one of those feeble attempts that almost immediately gets flagged by a lab. And then you look like a giant douche bag, who without any question, is fucked up on drugs beyond belief. Because who in their right mind follows their loyal doggo around waiting for it to hike a leg? People who are all spun out on dope, that’s who!
There has even been research done to see if there is any chance that drug users can actually pass a urine test with animal piss. The short answer is, no way. A study published in the Journal of Analytic Toxicology examined the urine of rats, pigs, horses, cats, dogs, cows and monkeys. It determined that there are distinguishing factors in those samples that separate them from humans.

“Our study showed that human and animal urine can be distinguished by 1H-NMR spectra combined with multivariate analysis,” the study authors wrote. “Several characteristic metabolites were found and could be used as biomarkers for distinguishing human and animal urine. So, the application of 1H-NMR with multivariate analysis and targeted metabolite profiling analysis might be a valuable tool in differentiating human urine from animal urine.”

There are definitely ways to cheat a drug test. People have been doing it for decades. The only problem is as soon as the drug testing industry catches wind of the latest tactics, solutions, pills, etc., to help the dirty get clean they come up with ways to combat them. It means if you’re still leaning on that issue of High Times magazine from 1983 to pass a drug test, you are probably going to fail bigger than shit. The truth of the matter is that sometimes people get lucky. But none of the tricks for passing a drug test come with a 100 percent guarantee. The only real way to ensure a negative result is to stay sober for a while. Sucks, we know. But most substances will be out of your system within three days. All except for marijuana, that’s a different beast altogether. Because it is fat soluble, it can sometimes stay present for up to a month. Skinnier people can clean up faster than those with a few extra pounds. Just keep that in mind. Especially if you’ve applied for a new job that requires a pre-employment drug screen or you’re on probation for a crime. It might be best to just steer clear of all things THC until that gets sorted out.