Man Burns $1 Million So He Doesn’t Have To Pay Ex-Wife Child Support, Judge Says It Doesn’t Work That Way, Sends Him To Jail 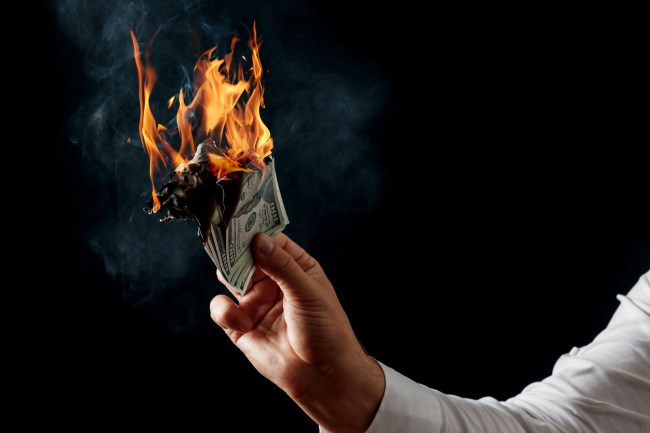 We have a new gold medal champion of the petty Olympics. Introducing Bruce McConville, a Canadian man who actually believed that if he burnt up his money that he would then be legally free of his obligations to pay his ex-wife child support. It isn’t working out for Bruce the way he thought.

Bruce McConville is a 55-year-old businessman, who ran a failed campaign to become the mayor of Ottawa in 2018. Coincidentally, McConville’s political platform was that he was “tough on crime.”

Bruce and his wife had recently gotten a divorce, and the court ruled that McConville had to pay his ex-wife spousal and child support.

Last week, McConville appeared before a judge and informed the court that he couldn’t pay his former partner child support because he burned $1 million of his own cash. Bruce told the judge that he made 25 separate bank withdrawals from six different bank accounts, totaling 1 million in Canadian dollars, which equals about $790,000 USD.

This will surprise nobody, but good ole Bruce didn’t record himself burning the cash or have any proof that the money no longer existed.

“Yes, I do,” McConville admitted.

“It’s not something that I would normally do,” McConville said in court. “I am not a person that is extremely materialistic. A little goes a long way. I have always been frugal. That’s why my business lasted for 31 years.”

Phillips declared that Brice “very clearly and deliberately set out to thwart the court and the proper administration of justice.”

“You are making a mockery of this court, and its process — something I will not allow,” Phillips told McConville. “You are conducting yourself with intent to deliberately and willfully frustrate the proper administration of justice.”

“More particularly, I find what you have done to be morally reprehensible because what you claim to have done willfully and directly undermines the interests of your children,” the judge added.

McConville said he was able to get his hands on $1 million by selling a few of his properties and businesses to his former accountant. That was a big no-no, since the court explicitly instructed McConville not to sell his assets.

At the end of the day, McConville was sentenced to 30 days in jail and was hit with a $2,000-per-day fine that will go directly to his ex-wife. The fine will continue until Bruce discloses his finances to the court.

Many of you will ask: “Is it illegal to burn money?” While it is illegal to burn U.S. currency, in Canada it is legal to burn paper currency. However, you are not allowed to deface coins. The Currency Act states that “no person shall melt down, break up or use otherwise than as currency any coin that is legal tender in Canada.”