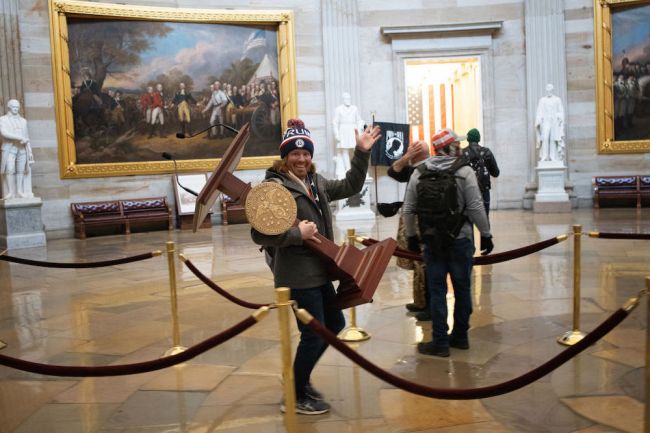 The lawyer for the man accused of rioting at the Capitol building in Washington, and being photographed walking out with Nancy Pelosi’s podium, admitted yesterday that the case against his client is pretty damn unwinnable.

Dan Eckhart, the defense lawyer for suspect Adam Johnson (the man better known as Via Getty), shockingly admitted to reporters yesterday that the case is almost open and shut against his client.

According to Twitter posts of the footage outside the courthouse,  Eckhart told reporters, “You have a photograph of our client in a building, unauthorized to be there, with what appears to be a podium or a lectern, I’m not exactly sure which one it is called. But that’s what we have.”

Johnson was released from federal court in #Tampa today on a $25K bond. He surrendered his passport and submitted to wearing a tether. A prelim hearing is set for Jan 19 in DC, the day before Biden’s inauguration. @10TampaBay pic.twitter.com/4EXZSuknkv

A reporter then states, “Obviously, that’s a problem for you as a defense attorney,” to which Eckhart replies, “Yes, I don’t know how else to explain that. But yeah, that would be a problem. I’m not a magician. So yeah, we’ve got a photograph of our client in what appears to be inside a federal building or the Capitol with Federal property.’’

In actuality, Eckhart’s job won’t be to claim his defendant is innocent but to argue that Johnson’s actions weren’t so bad compared to the other rioters and, hopefully, a judge takes pity on his stupidity.

In equally stupid news, one of Johnson’s rioting buddies – Jake Angeli – was refusing to eat in jail because the food wasn’t organic.

Angeli was the guy dressed like an extra in Braveheart with the facepaint and Viking helmet.

Angeli — who faces charges of disorderly conduct, violent entry and illegally being on restricted spaces within the Capitol grounds — has not eaten since then, his lawyer told a virtual federal court hearing on Monday, according to The Arizona Republic.

The Q-Anon supporter’s mom, Martha Chansley, later explained outside the courthouse that her son insists on only eating organic food.

Allegedly, Angeli “gets very sick if he doesn’t eat organic food,” according to his mom. He had not eaten since turning himself in on Saturday.

Angeli is now being fed organic food because he’s a shaman, and forcing him to eat regular food infringes on his religious rights.

UPDATE: Jacob Chansley (AKA Jake Angeli or QAnon Shaman) will be fed organic food, in line with his strict shaman diet, while in federal custody. "We will abide by the judge's order," U.S. Marshal David Gonzales said. @abc15 https://t.co/k6mxwQeofM

This is all going to make for an insane documentary someday.