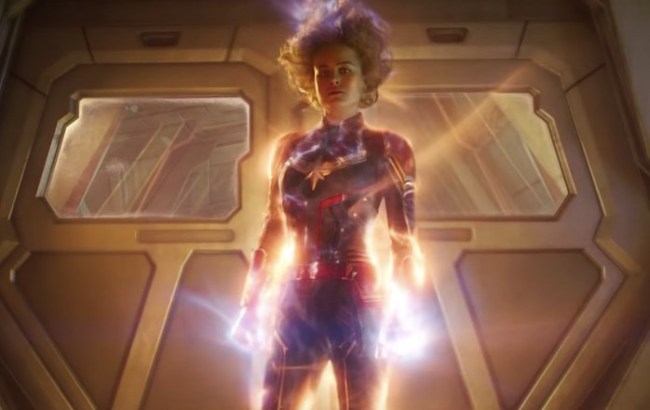 A brand new Captain Marvel trailer dropped during Monday Night Football and there’s a ton of new footage for fans to unpack. There aren’t really any potential spoilers ahead because 1) it’s a trailer and 2) everything surrounding Brie Larson’s Captain Marvel are really just fan theories at this point so I’m not sure we need a spoiler/disclaimer here.

Let’s start by watching the new full-length Captain Marvel trailer which debuted during this week’s Monday Night Football. This is the second trailer for the film that’s set to hit theaters on March 8, 2019 starring Brie Larson, Jude Law, and Samuel L. Jackson.

Below the trailer I’ve scoured the Internet to pull some easter eggs you might’ve missed throughout the trailer so you can really soak it in.

So what’d we miss?

One big reveal is Annette Bening’s presence in the film. We knew she was going to be in Captain Marvel but this is our first look at her character. Here we hear her telling Carol Danvers/Captain Marvel that they found her as a pilot with no memories and they transformed her into a super being by making her part Kree. We hear this around the :30 mark of the trailer

We also get a quick glimpse of Ronan the Accuser who was the primary villain in Guardians of the Galaxy. It was rumored that he’d be back in this film so we kind of expected this but we actually have eyes on him now at the 1:44 mark (we see the back of his hood). Ronan was a member of the Kree which is the race that Carl’s transformed into.

Carol Danvers’ cat was named Chewie in the comic books but in this trailer we see a young Nick Fury petting the cute pet cat and they’ve decided to name the feline Goose which is an obvious nod to the movie Top Gun. The cat is actually an alien species, a Flerken, and not a cat at all. It’s a species capable of attacking when threatened and it might’ve been protecting Carol here.

The Top Gun connection appears to extend beyond just the alien cat with Carol Danvers having flashbacks to being in the Air Force and this is likely a connection that’ll be explored more in future trailers and definitely present itself in the film.

It’s also worth noting that Nick Fury/Samuel L. Jackson doesn’t have his eyepatch yet. He appears on camera with two healthy eyes. I think it’s safe to assume that we’ll see him lose that eye at some point in this film.

I’ll update this as more easter eggs are found and hit the web.