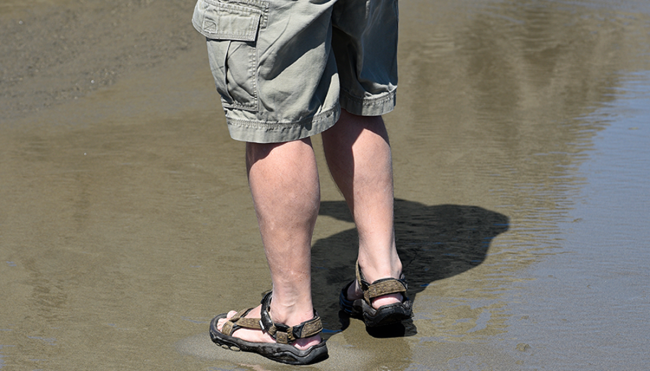 In Infinite Jest, David Foster Wallace predicted a future where capitalism devolved to a point where companies were able to secure the naming rights to the calendar year (and before you say anything, I fully acknowledge I’m being That Guy by opening this article with a reference to the footnote-obsessed author inextricably tied to insufferable literary types.)

We still haven’t reached a point where the numbers traditionally used to track the inevitable passage of time are replaced by whatever product is produced by the highest bidder, but with that said, I would like to issue a modest proposal when it comes to referring to 2021 by the name it truly deserves: The Year of the Cargo Shorts.

Last month, I couldn’t help but laugh when Rolling Stone claimed cargo pants were cool again, but the more I thought about it, the more I realized they might be on to something. While excessively-pocketed legwear has long been associated with dads who’ve given up on life and the middle schoolers who won’t let frigid temperatures stop them from showing off their pasty calves, there’s never been a better time for cargo shorts to make a comeback than right now.

Cargo shorts are perhaps the textbook definition of “function over fashion” and it’s safe to say no one has ever harnessed the extra storage they provide to stash pairs of underwear tossed their way by fawning women unable to resist their dripping sex appeal. However, in light of the events that have unfolded over the past year, it appears the aforementioned fathers that have historically paired them with a pair of white Asics and even whiter tube socks were incredibly ahead of the curve.

While cargo shorts have long been viewed as a first-degree fashion felony, society essentially came to the unspoken agreement to turn a blind eye to sartorial crimes following the onset of the pandemic, and if you’ve frequently lost count of how many days in a row you’ve worn the same pair of sweatpants since its arrival, I’d argue you’re not really in a position to assert yourself as an authority in this particular realm.

I’m also not going to pretend I’m an expert, but as we slowly ease back into a state of relative normalcy and gear up for what promises to be the most reckless summer most of us have ever witnessed, there’s an incredibly compelling argument to be made when it comes to maintaining the Planet Fitness approach to judging other people’s aesthetic and finally embrace the unparalleled practicality of cargo shorts.

In The Hangover, the character played by Zach Galifinakis (who just so happen to incorporate a joke about cargo shorts into his monologue when he hosted Saturday Night Live) did what he could to highlight the benefits of lugging around a man purse, but not too many people were swayed by the argument that they’re cool because Indiana Jones wears one.

Based on the similar stigma surrounding cargo shorts, I can understand why many people would recoil at the mere suggestion they deserve a spot in your wardrobe. Sure, they might be the polar opposite of that one sharp blazer you pull out on special occasions, but they’re spiritually similar in the sense they can be deployed when the moment calls for it without becoming a staple in your clothing rotation.

Even if COVID-19 begins to fade away in the coming months, the Official “Going Out” Checklist still won’t be limited to the once-standard trinity of your phone, wallet, and keys, as you’re going to have to have a spot to stash an extra mask, hand sanitizer, the pack of tissues you’re going to need when your immune system is rudely reintroduced to germs, and the pack of cigarettes and a lighter you’ll drunkenly buy at 1 A.M. after making up for lost time and remembering what it’s like to get hammered at a bar.

With the weather getting warmer, #JacketSZN and the increased capacity that comes with it will soon be behind us, and as a result, we should welcome #CargoShorts season with open arms—and if a recent survey that suggests dad bods are officially making a comeback is true, I can’t think of a better way to celebrate than giving cargo shorts the same treatment.