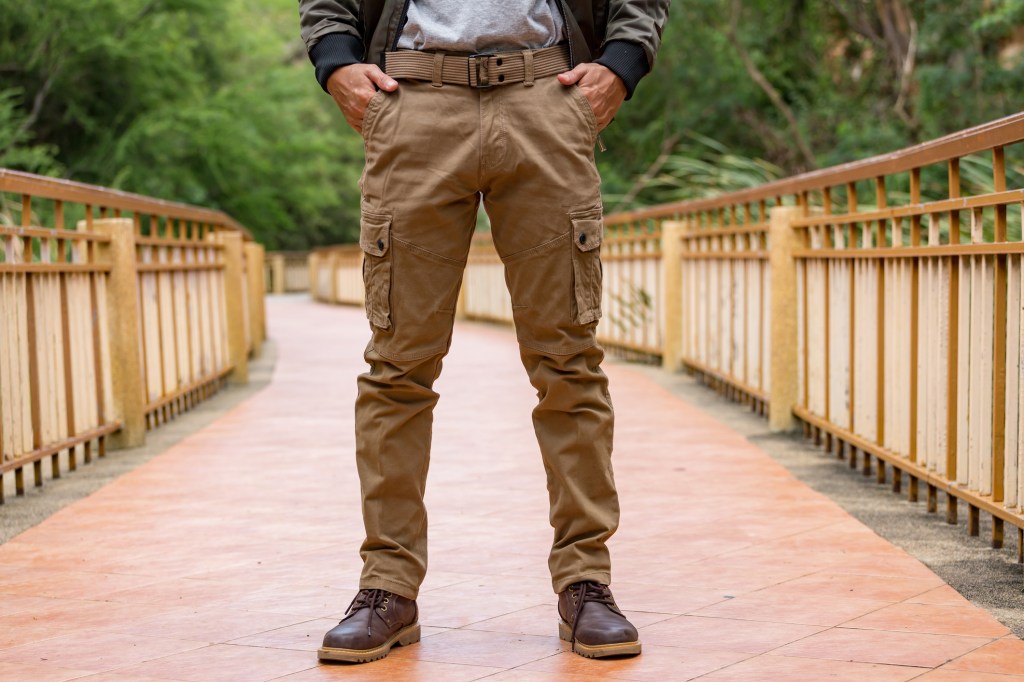 Well, boys, it’s official. Cargo pants are back in style!

At least that is the news hot off the press at Rolling Stone, so it must be true, right? “Cargo pants are officially back,” the music and culture publication claims in a recent fashion column. Yep, the all-American man is en vogue once again.

I jumped out of bed this morning with a new lease on life after seeing that my all-time favorite threads were coming back around. I couldn’t wait to throw it in my daughter’s face either. “Wake up, I’m fashionable again!” I wrote in a text message.

She and her friends have always made fun of me for wearing cargo garb, and basically, anything with enough pockets to hold my wallet, sandwich fixin’s, and about six beers. They think it is weird that I would dare venture out in public looking like I’m on a special assignment for National Geographic. But those little punks are completely oblivious to style. Cargo pants are the epitome of men’s fashion, and they are here to stay!

Cargos got a bad rap in the fashion world, mostly because they only come in green and brown and look like something a soldier might wear while invading a country. They have a sort of anti-fit personality, and almost any man – large or small — can look good in them. But women, wow, man, they hate cargos with an almighty passion. Yes, even more than a man’s worn-out underwear; more than him not rinsing beer cans before tossing them in the garbage; and more than that one t-shirt with yellow pit-stains. Seriously, anyone who has ever put on a pair for “date night” understands that hell hath no fury like a woman about to have dinner with Indiana Jones.

Cargo pants are so unappreciated by the female persuasion, in fact, that it is almost impossible for a guy to wear them in ANY capacity – even around the house – without feeling the constant, nagging gaze of a raging cargoist in the distance. This death glare (you know you’ve seen it) is presumably some ancient ninja mind trick that, if done correctly, can cause ruggedly stitched cotton blends to go up in flames. We suspect the many reports throughout the years of men succumbing to what appears to be spontaneous combustion is attributed to pyrokinetic cargo crimes.

Many a girlfriend has tried to instill a total prohibition on a man’s cargo-drobe. Still, men, at least the sly ones with any cajones at all, have done an admirable job at keeping them alive. It’s like Charles Bukowski said, “never give them that spark because as long as you have that spark, you can start the greatest fire again.” So as long as a man can find a way to keep a pair of old cargo pants or cargo shorts hidden away somewhere, there’s always an opportunity to resurrect those bastards.

And that time is now!

Rolling Stone credits the latest resurgence of cargo pants to the hip-hop culture. “The genre has completely redefined fashion, bringing streetstyle to haute couture and haute couture to the streets,” the column states. This cargo comeback is allegedly part of a trend that started more than twenty years ago when military apparel was something seen on hip-hop artists from Jay-Z to Destiny’s Child.

But the truth is, these pants never really went anywhere. They’ve been worn by real men for decades, regardless of how much they’ve been put on blast recently by fashion-forward generations.

Cargo pants were made for durability, and that is especially true in the grand scheme of their overall acceptance among the uncool. Guys who love these pants do not give two flying squirts about how they’ve found their way back into the mainstream. We’re just glad that we can finally wear them again without having to kick some Gen Z ass.

Most of us, however, think that anyone who drops $300-$400 on the ones recommended by Rolling Stone are on idiot drugs. Haute couture or not, we’re still just talking about cargo pants. Fortunately, there are still plenty of places to get a pair of cargos for under $100. If you’re like me, you probably even have a worn out pair of “green pants” in the back of your closet ready for wear. Just stop trying to cancel this classic style. Like it or not, pocket pants are forever legend. Sorry, kids, but it’s true!

Now, if you’ll excuse me. I have some sandwiches to make.