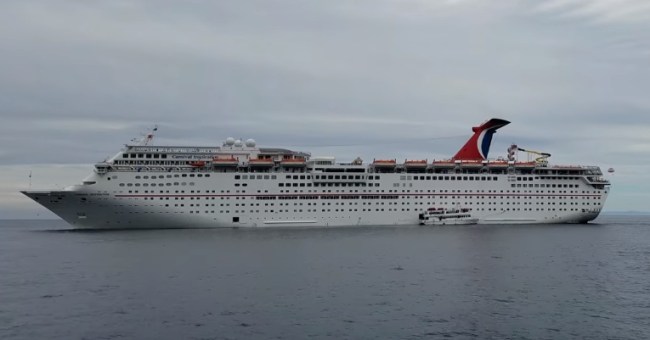 Getting stuck in an elevator is not ideal. There is the claustrophobia and then the thought that the elevator will come crashing down enters into your mind. Passengers aboard a Carnival Cruise Line started to panic after being trapped inside the cruise ship’s elevator. Now the passengers, including one who allegedly fainted during the ordeal, are being banned by Carnival Cruise Lines for their actions while they were stuck inside the elevator for over an hour.

On Thursday, Facebook user Jacob Burrola posted photos and videos claiming to be taken from the Carnival Inspiration cruise ship. The post was captioned: “Carnival Cruise Elevator Line snaps while crew members mock passengers and take video, meanwhile passenger faints inside. Crew tells passengers another 45 minutes won’t kill anyone after being stuck for over an hour with sick passengers on board.”

The passengers who were in the malfunctioning elevator allegedly received a letter from the captain of the Inspiration. “You will be disembarked from the vessel and not be permitted to sail onboard any Carnival Cruise Line vessel in the future,” the letter read. “This decision was based on your actions on the current cruise, which was a violation of the ship rules, interfered with the safety and/or enjoyment of other guests on the ship or caused harm to Carnival.”

“Your attempt to book a future cruise will result in cancellation and a possible loss of deposit monies,” the letter signed by Capt. Crescenzo Palomba stated. “You will be responsible for all travel expenses incurred and an invoice will be sent to your home address for payment.”

Burrola wrote on Facebook, “We did nothing wrong other than not sign their waiver for release of liability. We didn’t even know that we were banned until the final departing day when we walked off the ship.”

Carnival Cruise Line responded to the elevator accident by saying that “there are always two sides to every story.” Carnival Cruise Line’s statement read, “We had a group of guests stuck in one of our elevators last week for approximately 30-40 minutes. Our onboard team was summoned to provide assistance. Unfortunately, because of the extensive damage to the elevator doors and cabling caused by the guests, the work took longer than expected.”

Carnival confirmed that the guests were permanently banned from traveling with them in the future. “Given the extensive damage they caused to the elevator and their behavior towards both other guests and crew we decided it was best for this group to find another cruise line to sail,” the statement said.

How much damage could they have done to an elevator? Apparently enough where the cruise line would send you the bill. And why would you want to damage an already malfunctioning elevator?