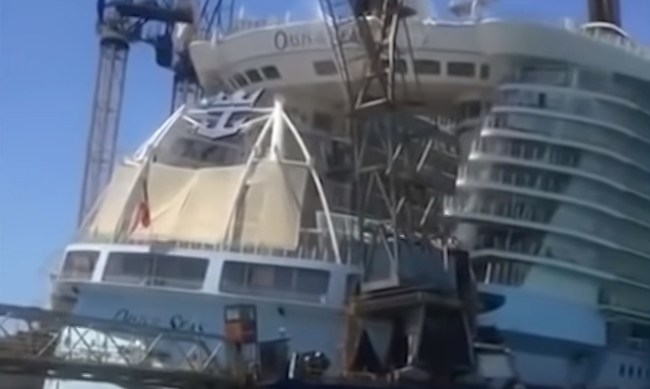 A crane collapsed on the third largest cruise ship in the world. There were eight people injured from the cruise ship accident and the damage has forced Royal Caribbean to cancel three future sail dates for the Oasis of the Seas.

Police nor our teams on the ground can confirm if anyone has been injured… pic.twitter.com/mQ6QXYa3Hw

Eight people on board the 225,282-gross-ton ship were injured and thankfully none are said to have life-threatening injuries. So far authorities are unsure what caused the crane to topple onto the cruise ship. “We are aware of damage to the dock structure and to construction cranes,” Royal Caribbean said in a statement. “We are assessing damage to the ship.”

The Oasis of the Seas, which is registered in the Bahamas and typically departs from Port Canaveral, Florida, was forced to cancel three upcoming sailings. Royal Caribbean announced that the Oasis of the Seas sail dates for April 7, 14, and 21 have all been canceled.

Royal Caribbean said all customers will get a full refund and a 100 percent certificate for a future cruise. Any excursions purchased for those canceled cruises will also be refunded. The first Oasis of the Seas sail following the crane accident will be on May 5th with a seven-night sailing from Barcelona, Spain with stops in France and Italy.

This latest cruise accident comes at a time when the cruising industry has suffered some well-publicized incidents. Last month, 1,300 passengers aboard a Viking Ocean cruise ship had to be evacuated by helicopter after engine malfunctions caused the cruise liner to be stranded during a storm in Norway.

Two weeks ago, a Royal Caribbean passenger filed a $10 million lawsuit against the cruise company after he broke his pelvis while on a ride aboard the Mariner of the Seas.

In March, a rogue wind gust of 115 mph slammed into cruise ship and actually tilted the huge vessel. Tables and chairs were sent flying and several guests were injured.