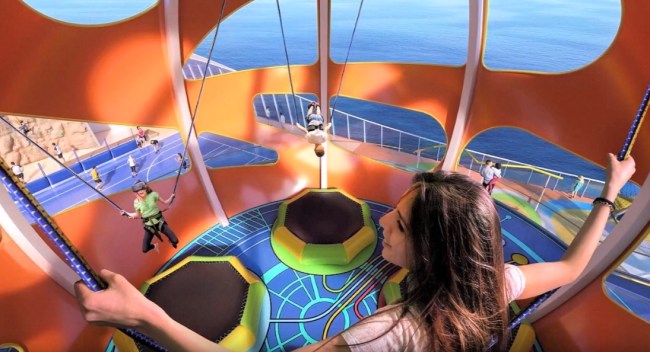 A passenger aboard a Royal Caribbean cruise suffered horrible injuries in early February that he is still suffering from over a month later. The cruise accident happened on a relatively new attraction aboard the Mariner of the Seas. The passenger is now suing Royal Caribbean for $10 million for the injuries he suffered from the accident.

Royal Caribbean’s Mariner of the Seas made its maiden voyage on November 16, 2003. But with cruise ships getting closer to becoming modern floating cities, a vessel over 15-years-old can seem archaic in the highly competitive market of cruise travel. Royal Caribbean upgraded the 138,279-ton, 1,020-foot-long cruise ship in June of 2018.

The Mariner of the Seas received $120 million in renovations at the Cadiz Navantia shipyard in southern Spain. One of the upgrades was the addition of Sky Pad, a combination of bungee and trampoline that also adds virtual reality to give you a one-of-a-kind jumping experience.

Casey Holladay was excited to test out the new Sky Pad attraction. “We were really excited because we had seen a commercial that Royal was promoting for this Skypad, this awesome experience in the sky,” Casey told NBC 6.

But the fun turned to terror with one big jump. While bouncing on the Sky Pad, Casey’s harness snapped in mid-air right when he was in the middle of a huge jump. The 25-year-old came crashing down to the cruise ship’s deck.

His girlfriend captured the scary moment of the cruise ship accident. “I just felt the momentum release from my body that I wasn’t being held by anything anymore,” he said. “When I hit all I really remember is the hit and the noise and the fear.”

On his 11th bounce, Casey fell from about 20-feet and landed on his side, fracturing his pelvis. Casey’s injuries were so severe that the Mariner of the Seas, which can accommodate 4,252 passengers, did not continue to the port in the Bahamas and turned around to go back to Miami, Florida.

Casey was wheeled off the vessel on a stretcher and was brought to Jackson Memorial Hospital. Casey spent nine days in the hospital and underwent several surgeries to repair his broken pelvis as well as his dislocated shoulder. “It’s kind of one of those cliché moments when your life changes in the blink of an eye,” Casey said.

“Casey was a very healthy young man just getting started,” said Casey’s lawyer Brett Rivkind. “One second he was out on a cruise ship with his girlfriend, the next thing he knows he’s in the trauma center having surgery. Right now he can’t bear any weight, he’s in and out of doctors’ visits regularly to see how he’ll heal. He’s severely limited in his everyday activities. He has pain still.”

A month after the accident, Casey is still using a walker and a wheelchair. “My life got changed without me having a say,” Holladay said. “I am fearful that I am not going to be able to enjoy the day-to-day like I’m used to.” Holladay has been told that he still has months of rehabilitation ahead of him.

“He suffered very severe debilitating injuries,” said Rivkind, who is a maritime attorney. “This is a life-changing accident that never ever ever should have happened.”

Last week in Miami federal court, Holladay sued Royal Caribbean for $10 million. Holladay’s lawsuit against Royal Caribbean alleges that the operators gave no warnings and failed to inspect and maintain the support ropes.

“These are activities that were designed to be operated on land by experienced amusement park operators. They really do not have the experience to do a proper analysis of the safety risks of putting these types of activities on a cruise ship,” Rivkind said.

Royal Caribbean does not comment on pending litigation, but corporate communications manager Owen Torres said, “We operate all our ships safely, professionally and responsibly.”

To add insult to injury, there is also video showing Royal Caribbean staff attempting to stop Casey’s friend from recording the aftermath of the accident. An employee can be seen putting his hand and body to block the cameraman from recording the incident.

“The video shows there was a stronger interest in preventing other passengers from videotaping and preserving the evidence than paying attention to Casey. That’s appalling,” Rivkind said. Holladay added, “All staff should have been attending to me.”