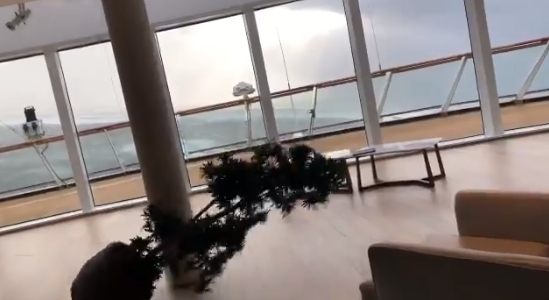 Today’s cruise line company that had a frightening voyage is… *spins wheel* …Viking Ocean Cruises. Scary videos from the Viking Sky show the cruise ship being battered by turbulent waters and powerful gusts of wind turning the happy vacation into a cruise nightmare.

The Viking Sky suffered engine malfunctions that caused the $400 million cruise ship to stall in the Norwegian Sea off the western coast of Norway, near the coastline of Hustadvika. A storm in the area slammed the ship with wind gusts of up to 43 mph and waves over 26 feet high on Saturday. Footage shows the Viking Sky being smashed by the rough waters as furniture slid across rooms, ceiling tiles fell, and the ship swayed heavy from side to side.

The emergency situation during the Norwegian cruise forced the ship to send a mayday call. The ship’s crew were able to get one of the engines to work, but the seas were too rough to sail in and they dropped their anchor. The captain knew the cruise ship was in trouble and decided to evacuate 1,300 passengers and crew, but the waves were too dangerous to use the lifeboats.

The passengers and crew had to be evacuated by helicopters. Five helicopters were sent to the cruise ship to airlift stranded passengers. However, two of the helicopters had to attend to another helpless ship that was in trouble from the storm, this one was a cargo ship.

Helicopters continuing to evacuate passengers from the #VikingSky, which is suffering engine issues off the Norwegian coast. Rough seas and high winds making evacuation difficult.

Tracking in the area: https://t.co/9LOL4JaCjD

RELATED: Carnival Cruise Turns To ‘Pure Chaos’ After Ship Violently Tilts To One Side – ‘It Was Like A Scene From Titanic’

Passenger on board #VikingSky Crew is doing a good job. Evacuation is slow. Seas rough. One muster station had a door blow in, injure pax and flood. Moved to midship pic.twitter.com/ndvEaJew8L

Norway’s Red Cross has launched a “massive” operation with over 100 volunteers to assist the evacuees. The evacuees will be transferred to hotels in nearby towns. Some passengers have been taken to hospital but there have been no serious injuries reported yet according to local police.

Helicopters and multiple boats are rescuing more than 1,000 people from a cruise ship adrift in bad weather off Norway.
The Joint Rescue Coordination Centre of Southern Norway’s Borghild Eldoen says she expects the rescues to last “through the whole night” https://t.co/tcrLcLGHqn pic.twitter.com/Zgc15RfVme

The Viking Sky was in the middle of their 12-day voyage that began in the Norwegian city of Bergen on March 14th. The cruise itinerary included several stops at ports in Norway and the final destination was scheduled to be Tilbury, United Kingdom. The Viking Sky began service in 2017, weighs 47,800 gross tons, has nine decks, and is 745-feet-long.