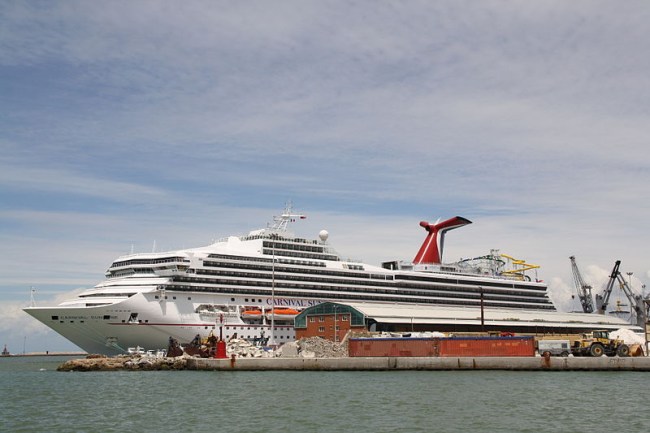 Cruises are a great travel value and amazing vacation option — unless you fall off the ship, it begins to flood, navigates into a bomb cyclone that makes everyone sick, real-life pirates attack your cruise ship, or if your cruise liner suffers a mechanical malfunction that causes the ship to violently tilt to one side. That was the unfortunate scenario that passengers of a recent Carnival Cruise were subjected to.

The Carnival Sunshine left Port Canaveral on Sunday, Oct. 28, for five days of fun in the sun of the Caribbean. However, the ship experienced a technical issue on Sunday evening. The massive 893-foot-long, 102,853-ton vessel suddenly listed to one side. The motion was so abrupt and forceful that it caused plates, glasses, bottles and more to fall to the ground and even people fell out of their seats.

This is the inside of the Carnival Sunshine cruise ship on Sunday evening. @CarnivalCruise says the ship listed (tilted or leaned) because of a technical issue just hours after leaving @PortCanaveral.

(H/t to David Crews for the pictures) pic.twitter.com/usSaQsZBzG

“I didn’t think anything of it, since it’s not uncommon for ships to rock back and forth. But it didn’t rock back. It kept leaning,” passenger David Crews told WKRG. “Plates and silverware started sliding off the tables. Then the tables themselves started to slide. Glasses and plates started to fall and shatter. At this point, it was pure chaos. Screams. Cries. Panic.”

Passenger Kyla Williams said she was falling out of her seat. One woman said she hurt her back during the mishap and was unable to go on any excursions the next day because of the pain. Carnival Cruise Lines acknowledged that there were “some minor injuries.”

One of the 3,000+ passengers onboard described it as the “scariest experience.” Guests on the cruise said they saw water inside the ship, which originally debuted in 1996. “We were actually at the table where the window broke and the water came in.”

A passenger was having dinner around 8:30 pm. when “next thing we know, the whole boat tilted … we were literally hanging on for our lives, dangling … it was really like a scene from the Titanic.”

RELATED: Everything You’ve Ever Wondered About Cruises And The Cruise Industry Answered

Thankfully, the leaning motion only lasted about one minute, but for some of the passengers, it was trauma that stuck with them. “[We went] down to our room and got our life jackets and literally carried them around the rest of the night … that’s how scared we were, every time you felt the boat move you were like, oh, crap, is it happening again?” a passenger told WFTV.

Many tweets about the scary cruise have been deleted, but the messages were reported about in Yahoo before erased from Twitter. “I’ve been cruising since 1998 and never had an experience like that before,” a passenger wrote on Twitter before being deleted.

“Last night was a very scary experience on the Sunshine,” said the now-deleted tweet. “The starboard side literally felt like it lifted. I was in the dining room on 3. All the tables slid and fell over, glass falling and breaking. People screaming. And all we get is, ‘It’s being investigated.’”

“There were people everywhere crying, having anxiety attacks,” one person alleged. “Children crying. I’ve been cruising since 1998 and never had an experience like that before. All we want to know is… WHAT HAPPENED? We don’t feel safe. And deserve an explanation.”

A letter from the ship’s captain was sent to all of the passengers on the Carnival Sunshine the day after the traumatizing experience.

This is the letter guests received from @CarnivalCruise after their ship started to lean/tilt, causing all sorts of damage. pic.twitter.com/v5UNaM7LVA

“We have identified that an electrical switchboard malfunction impacted the use of the fin stabilizers,” the letter reads. “It’s important to note that fin stabilizers are not a safety feature; they are deployed solely for guest comfort to minimize any potential ship motion while at sea. There was never any issue with the safe operation of the ship, and our officers quickly intervened to correct the situation.”

Carnival offered each guest a $50 credit for their suffering. Carnival Cruise Lines issued a statement:

“There was never any issue with the safe operation of the ship and our officers quickly intervened to correct the situation. Following the incident, evening events resumed for our guests and the ship proceeded on its Caribbean cruise as scheduled. Carnival provided photos that show the ship fully functioning once it balanced out. “The ship remains fully operational and will sail as scheduled on Friday, Nov. 2. We remain confident of the safety of the ship as we are committed to the safety of our guests and crew.”

Scary moments on a Carnival Cruise Line ship as it about to dock. https://t.co/nyNJqyTO0m pic.twitter.com/HpUQ0we7W8

Some passengers requested to disembark at the ship’s first stop in Amber Cove, Dominican Republic. As part of Carnival’s Great Vacation Guarantee, passengers were allowed to get their money refunded and they were taken back to Florida. The ship didn’t have any more issues and returned to the Port Canaveral Cruise Terminal on Friday.

#BREAKING: @CarnivalCruise Sunshine is returning to @PortCanaveral. It comes 5 days after a malfunction caused the ship to list, causing chaos onboard. https://t.co/23i5pUczCK pic.twitter.com/MGma2LzAiM