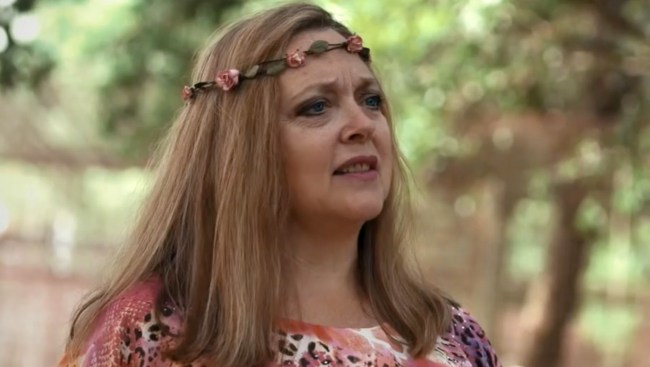 Carole Baskin says she hopes the commercial aired by the family of Don Lewis during Dancing With The Stars which mentions her by name ends up helping to locate her missing husband and find out what happened to him.

Which, of course, is, hypothetically, very easy to say when you know for a fact that there is absolutely zero chance of it ever happening. Just sayin’… as The Juice likes to say.

Baskin was interview leaving Dancing With The Stars rehearsals Wednesday by TMZ and expressed how “wonderful” it would be if the mystery of her missing husband were to be solved thanks to the ad. She also called it a “side benefit” of being on the show.

She was also asked if she thinks Donald Trump should pardon Joe Exotic after he submitted a 257-page document to the President detailing why he thinks he should be freed from prison.

Baskin was wearing a mask (tiger-themed, natch), but it was still very obvious that she wasn’t down for that to happen as she turned and walked away.

Which is interesting as when asked about the commercial by Don Lewis’ family immediately after the show, Baskin told Entertainment Tonight that she thinks it was just a “huge publicity stunt on their part.”

Sadly, it doesn’t appear as though Carole will be with us on Dancing With The Stars much longer as she garnered the lowest score of the night during the season premiere, getting just 11 of a possible 30 points, and whose mere appearance The Daily Beast called “a new low for the show.”