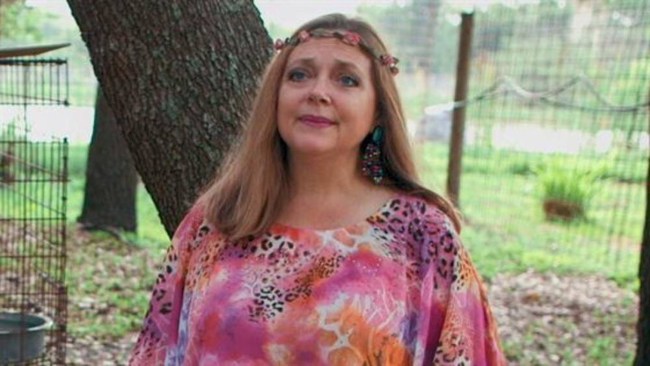 While most of you were probably focused on Monday Night Football, the 834th season premiere of Dancing With The Stars also aired on network television Monday night.

Normally, our coverage of that would be nonexistent, but with Tiger King cat lady Carole Baskin appearing on the show this season it definitely warrants some of our attention.

Especially after it was revealed during the day on Monday that the family of Carole Baskin’s missing husband Don Lewis was going to air a commercial about his case during the Dancing With The Stars premiere.

As we reported previously, Don Lewis’ daughter recently hired a lawyer after the sheriff down there said Carole Baskin forged his signature on his will, Lewis’ lawyer believes Lewis was strangled and thrown out of a plane, and Lewis’ granddaughter actually thanked Joe Exotic for trying to kill her.

So it would appear that they’re pretty sure she did it.

In the spot that aired on Dancing With The Stars Monday night, Lewis’ three daughters, Gale, Lynda and Donna, all spoke about how much they miss him and asked for assistance in finding out the truth about the case. Lewis’ his former assistant, Anne McQueen, also appears in the ad.

At the end they offer a $100,000 reward for information and posted a tipline number. And, oh yeah, they do mention Carole Baskin by name.

Wow. What an ad, right? It’s really bolstered by the YouTube link to RipperJack Media, who is… ummm… some random guy who describes himself and his YouTube channel as “A Seeker of Justice & sometimes gamer. This year I’m looking for Justice for students from Highland Community College in Kansas, and also Justice for Don Lewis. This Channel is for entertainment purposes only. I am not an attorney, and do not give out legal advice. Comments I make are based on my opinion, and should be taken as my opinion.”

Oh yeah, this case is going to get solved in no time now.