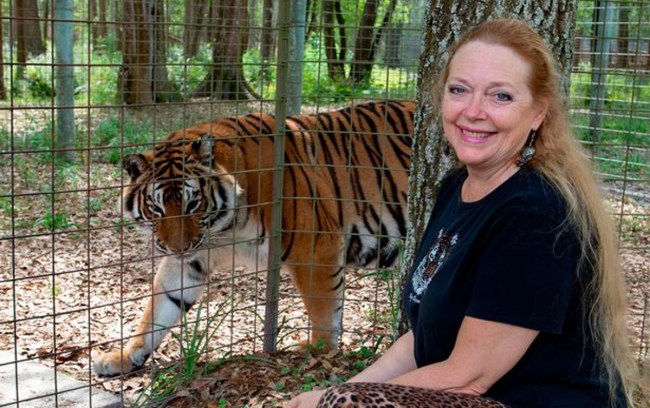 Pretty much everyone who watched Tiger King: Murder, Mayhem and Madness and followed along on the internet knows that there is certainly enough material left over to make a second season (and a third, fourth, fifth, sixth, seventh…).

So, considering what a gigantic hit Tiger King was for Netflix, they’d have to be stupid to not want to keep that gravy train rolling by producing a second season of the batsh*t crazy docuseries.

Just one problem though. One of the “stars” of the series, Carole Baskin, is reportedly looking to make bank (much like she has with her bizarre Cameo videos) in order to participate in a second season of Tiger King.

According to The Sun…

Joe, 57, serving 22 years for plotting to kill Ms Baskin, has vowed to take part alongside other stand-out stars, including his husband Dillon Passage and Jeff Lowe, who took over Joe’s zoo in 2016.

But there is a question mark over Carole, 59, after her team failed to strike a deal.

An insider said: “Carole is asking for a seven-figure sum.

“It’s around the £1million ($1.310 million USD) mark. She wants to plough it into her Florida sanctuary, Big Cat Rescue.

“Taking part in Tiger King opened up her private life and she wants to make sure it’s worth her while.”

Big surprise Joe Exotic is totally down for another season of Tiger King. Dude must be dying without the spotlight being shined on him aymore.

Exotic also thinks that by doing a second season of Tiger King he can help clear his name and get himself out of prison.

Throw in the fact that the current owner of Joe Exotic’s zoo, Jeff Lowe, is being evicted after a federal court ruled that the big cat sanctuary be turned over to Baskin as Exotic had no right to sell it to Lowe because he had illegally transferred ownership to his mother in 2011 in an effort to prevent it from being seized by creditors.

Like I said, there’s definitely enough martial for a second season (and then some) of Tiger King.