Here’s Carole Baskin Rapping 50 Cent’s ‘In Da Club’ And Just Like That, 2020 Is Officially Canceled 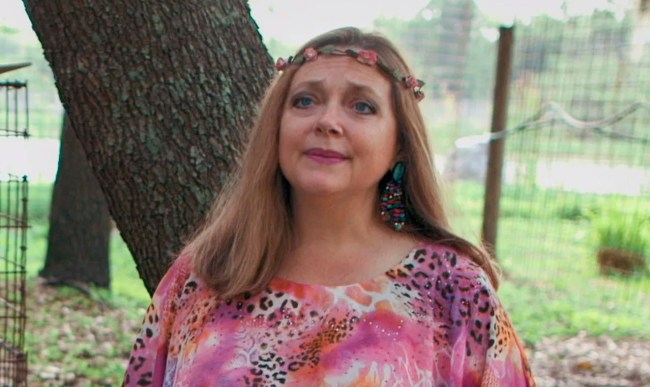 Murder suspect and star of the Netflix documentary Tiger King Carole Baskin has been making hay while the sun shines before her 15 minutes of fame expires by raking in the cash doing videos for people on Cameo.

A lot of why Baskin is making so much money – she is charging $199 per video – is because she appears to be willing to do and/or say just about anything anyone asks her.

Give a video shoutout to convicted pedophile Rolf Harris? She’s totally down for that.

Carole Baskin has had a shocker here😂😂 pic.twitter.com/hYrQxC5PoY

Just don’t ask her to mention her missing dead husband. That’ll a big no from the new owner of Joe Exotic’s zoo.

Baskin’s latest effort sees her and her husband Howard giving a birthday shout-out to someone named Charlotte by rapping a verse from 50 Cent’s single “In Da Club.” Preceded by “Hey all you cool cats and kittens,” of course. Never thought I would hear Carole Baskin say she is “here with the crip mates,” and yet here we are.

THIS IS INCREDIBLE ON SO MANY LEVELS #TigerKing #CaroleBaskin pic.twitter.com/oVVYOJmXXZ

Oh, and if you happen to have any anonymous tips to share about, say Carole Baskin’s missing dead husband, be sure to use the app she promoted and says she wishes she had “had around a few years ago.”