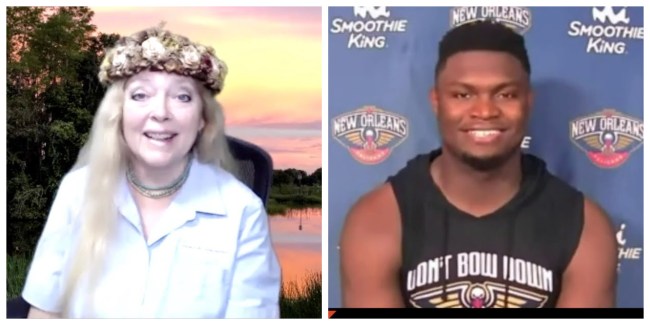 Carole Baskin has really parlayed her fame from Tiger King into full-fledged, mainstream popularity. While most of the recognition hasn’t been too great since, you know, it involves people alleging she killed her former husband, Don Lewis, that doesn’t matter when you’re making dollar dollar bills, y’all.

But, hey, we live in a world where 15 seconds of fame (somehow) stretches into years of fame, and good ol’ Carole’s just taking advantage of her opportunity.

If you need more proof of that, just take a look at Carole Baskin’s Cameo profile, where the price for her to record a video has gone from $79 to a whopping $199 per request in a matter of a few days. Nothing says “you’ve made it” quite like getting people to spend money to watch you deliver some mindless video greeting, right?

Well, somebody had the genius idea to get Carole to wish Zion Williamson a happy birthday, as the top pick in the 2019 NBA Draft turning 20 years old on July 6. And, in typical Baskin fashion, the end result was as weird as you’d probably imagine it would be.

Uh, OK then. Does anyone else feel a little creeped out by the video to Zion? If not, something’s wrong with you, because Carole Baskin’s giving off a weird vibe that’s surely freaking out the Pelicans star.

With everyone bored AF after the holiday and long weekend, though, I personally want to thank Carole for delivering something to at least get me excited about looking at the Internet today. In that sense, she was successful — but it’s still bizarre.

Naturally, there were plenty of people on Twitter who shared a similar sentiment, with a bunch of the posting reactions to the birthday wish.

She killed that video like she killed her husband

I hate how much this hits tho lol pic.twitter.com/mG9wPmegMa

I’m not sure how I feel about this 😂

Receiving a birthday wish from someone is usually a good feeling. But getting one from crazy Carole Baskin probably isn’t something Zion Williamson was expecting as he welcomed in a new decade — and he’s probably weirded out with her delivery of the whole thing. Seriously, what’re the odds that Carole even knows who Zion is? I’d put them at slim to none.