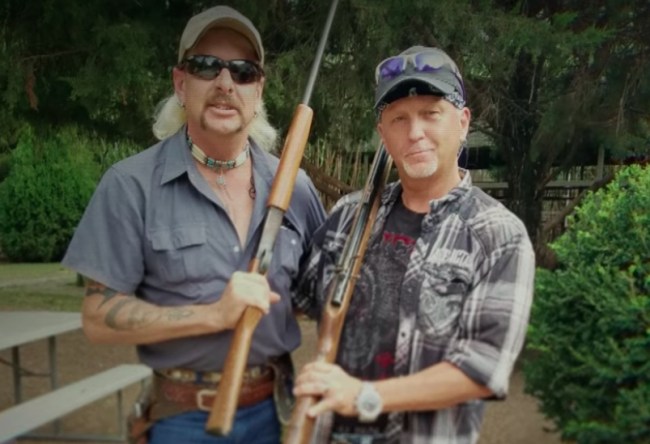 I don’t know how many times I asked myself “There’s no way this is real, right?” while watching Tiger King and there’s still a tiny part of me that’s convinced Christopher Guest will eventually come forward and reveal the series is actually the most complex and ambitious mockumentary ever attempted. However, even if the people featured in Tiger King aren’t actually actors, I think it’s still accurate to refer to all of them as “characters” based on some of the unbelievable traits they possess.

Take Jeff Lowe, the-soon-to-be-former owner of the Greater Wynnewood Exotic Animal Park (a.k.a. the G.W. Zoo) that he acquired from the man, the myth, and the legend who is Joe Exotic. Before finding himself in Oklahoma, the walking Oakley billboard and proud swinger who was once embroiled in a lawsuit with Prince lived in Las Vegas, where he made a solid living shoving baby tigers into suitcases and smuggling them into the hotel rooms of people who paid to take pictures with them. He also has a thing for hiring attractive women to pretend to be his nanny for some reason.

Despite all of that, he still manages to come off as one of the more normal people to appear in Tiger King, which is certainly no small feat.

Lowe is currently gearing up to part ways with the G.W. Zoo while doing what he can to transform it into the “complete hell” he’s pledged to leave Carole Baskin, who will officially become its newest owner in September. There are plenty of people out there who are convinced Baskin killed her former husband but it seems like Lowe is pretty convinced  Exotic might’ve also been engaged in some foul play.

As if this entire saga wasn’t absurd enough, things recently took another turn when the fascinating specimen who is Zak Bagans got involved. The host of Ghost Adventures recently visited the zoo to film an episode of the show (and take possession of Exotic’s penis pump and Travis Maldonado’s meth pipe for his “Haunted Museum”) only for production to come to a sudden halt when the cadaver dogs he brought with him detected human remains near an alligator pit. However, the police who were called to the scene determined a dead animal had triggered the signal.

Lowe apparently wasn’t convinced, as TMZ reports he called up the company that supplied the dogs to have them do another sweep and sources told the outlet that four different canines all sensed the presence of remains in the vicinity of the same pit. People close to Exotic chalked up this development to the ashes of multiple people who apparently wanted to be scattered there, so while I don’t know how this is going to play out, I do know Tiger King is the gift that keeps on giving.