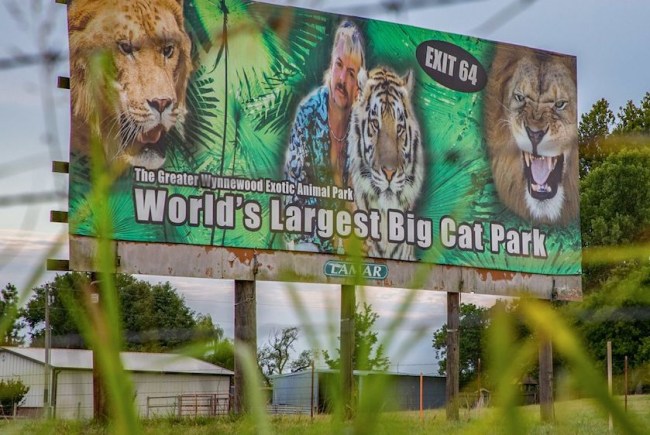 A new reality show filming at the private zoo featured on “Tiger King” was briefly shut down this week after the film crew thought they’d stumbled upon human remains.

Jeff Lowe, the current owner of the Greater Wynnewood Exotic Animal Park once owned by Joe Exotic, told KOCO 5 that the show “Ghost Adventures” is filming on location, and host Zak Bagans brought cadaver dogs. Not one but TWO cadaver dogs alerted handlers to the possibility of human remains, according to the local ABC affiliate.

Agents with the Oklahoma State Bureau of Investigation and Garvin County Sheriff deputies responded to call but found no evidence of human remains.

Reporter Taylor Adams of Oklahoma station KFOR tweeted that officials concluded the remains were that of a small animal.

“The Garvin County Sheriff says no human remains were found on-site at the GW Zoo tonight. Instead…a small animal. He says the investigation is over,” explained Adams.

‼️EXOTIC UPDATE‼️: The Garvin County Sheriff says no human remains were found on site at the GW Zoo tonight. Instead…a small animal. He says the investigation is over. @kfor @joe_exotic pic.twitter.com/ibLqWx5DVH

Last month, a federal judge granted Baskin’s Big Cat Rescue control of the facility, after ruling “the property was fraudulently transferred years ago to Joe Exotic’s mother, Shirley Schreibvogel, to as a way to avoid paying Baskin a previous $1 million trademark judgment.”

Lowe is in the middle of his own legal issues after recently being sued by the state of Oklahoma for at least $50,000 in back sales taxes.

Meanwhile, Carole Baskin is being investigated by the daughter of her former husband for possibly forging his signature on his will. Baskin is spending her time sending birthday wishes to Zion Williamson.

And our hero, Joe Exotic, is slowly wasting away in jail and begging Cardi B for help.