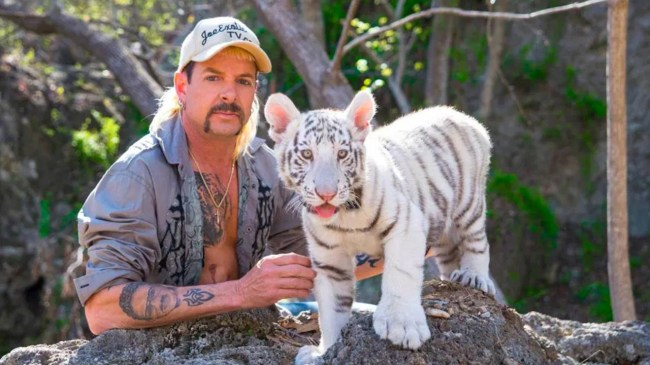 With Kate McKinnon set to play Carole Baskin in an upcoming series, another Tiger King-related special, and a Discovery ID series still to come, the Netflix juggernaut that is Joe Exotic is showing no signs of slowing down anytime soon.

And if one radio station gets it way, we’ll be getting a regular fix of the man former Joe Exotic TV producer Robert Kirkham called “one of the most evil people I’ve met in my entire life.”

Speaking exclusively to Metro.co.uk about how Joe could soon make a glistening comeback to the limelight, his husband Dillon Passage revealed: ‘This radio station here in the US wants him to have his own radio show from inside the prison.

‘So we’ll see what happens with that. It’s kind of mind-blowing.’

Dillon added that while he used to speak with his husband between three and five times a day, their conversations have been cut short since he was moved to a prison in Texas.

‘I’ve only been able to speak with him two times in the last two and a half week,’ he disclosed, adding that they last spoke on Monday.

Exotic, who was recently placed in coronavirus isolation in prison, tested negative for the virus, said Passage, adding, “I know he absolutely loves the attention.”

Exotic — real name Joe Maldonado-Passage — is currently serving 22 years in federal prison after being convicted on 17 federal charges of animal abuse and two counts of murder for hire.

More Tiger King!
• Rick Kirkham Of ‘Tiger King’ Says The Docuseries’ Star Joe Exotic Has A Secret Ex-Wife And Son
• Fans Of ‘Tiger King’ Are Convinced The New ‘Call of Duty: Modern Warfare’ Skin Is Based On John Finlay
• Sheriff Investigating The Mysterious Disappearance Of Carole Baskin’s Husband Speaks Out
• No Masters, No Problem: Instead, Please Enjoy This Inspiring AF Tiger Woods-Tiger King Mashup
• Former ‘Joe Exotic TV’ Producer Rick Kirkham Reveals Things Were ‘A Hell Of A Lot Worse Than What You Saw’
• ‘Tiger King’ Joe Exotic Had A FIFTH ‘Husband’ Who Didn’t Appear On The Show That’s A Murderer And Pedophile
• David Spade On Why He Couldn’t Play Joe Exotic, Even Though The ‘Tiger King’ Star Wants Him (Or Brad Pitt) To Do So
• Local TV News Reports About Joe Exotic And Carole Baskin From 2017 To 2019 Are Like A Wormhole Filled With Crack
• Power Ranking The 8 Worst People To Appear In The Netflix Documentary ‘Tiger King’
• Legendary Wrestling Announcer Jim Ross Had One Of The Best Takes On Fellow Oklahoman Joe Exotic
• Donald Trump Jr. Gets Hilariously Mocked For Comparing His Dad To Convicted Felon Joe Exotic
• Granddaughter Of Carole Baskin’s Missing Husband Posts TikTok Thanking Joe Exotic For Trying To Kill Her
• Sheriff Says He’s Getting 6 Tips A Day About Carole Baskin’s Missing Husband, Says She Refused A Polygraph
• Carole Baskin’s Boyfriend After Her Husband Disappeared Also Filed For A Chilling Restraining Order Against Her
• Shaq Denies Being Friends With Joe Exotic, Facetimed Jeff Lowe Following The Release Of ‘Tiger King’
• ‘Tiger King’ Inspires Cops To Take Another Look Into The Disappearance Of Carole Baskin’s Husband
• Kate McKinnon Set To Play Carole Baskin In New Series Based On Story From Netflix Documentary ‘Tiger King’