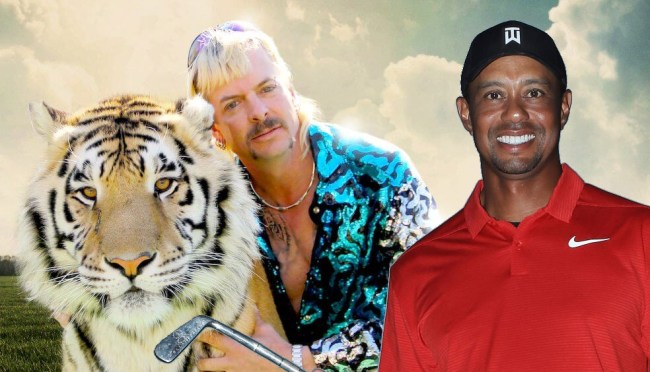 Missing Masters Week? Aren’t we all? 2019 Masters champion Tiger Woods is certainly missing it since he went ahead on Tuesday and held his own version of the Masters champions dinner.

Much like many of us golf fans, Woods has been self-isolating, hanging out with his kids, exercising, growing a quarantine beard, and holding putting contests with his 11-year-old son Charlie where the winner gets to keep Woods’ green jacket in their closet that night.

And in news that will surely make O.J. Simpson’s blood boil, Tiger has even been able to get in a few rounds at his home course, Medalist in Hobe Sound, which still remains open, even in the wake of the worldwide pandemic.

But hey, the Masters… we miss it so much.

The PGA Tour is currently shooting for a mid-June return at the Memorial, but there is no guarantee that will actually happen.

As a result of all the postponements, we’re going to have to wait until at least the week of November 9th through the 15th before we will get our Augusta fix.

On the positive tip, at least we will now have one more bonus episode of Tiger King and two new Tiger King specials that will examine what really happened to Carole Baskin’s missing husband to keep us occupied while we wait.

Nothing will replace The Masters this week, but I hope this video will help with the pain.

I saw a Tiger. pic.twitter.com/JHUsDi2pSs

I didn't realize how much I needed this. Thank you 😂😂

More Tiger King!
• Former ‘Joe Exotic TV’ Producer Rick Kirkham Reveals Things Were ‘A Hell Of A Lot Worse Than What You Saw’
• ‘Tiger King’ Joe Exotic Had A FIFTH ‘Husband’ Who Didn’t Appear On The Show That’s A Murderer And Pedophile
• David Spade On Why He Couldn’t Play Joe Exotic, Even Though The ‘Tiger King’ Star Wants Him (Or Brad Pitt) To Do So
• Local TV News Reports About Joe Exotic And Carole Baskin From 2017 To 2019 Are Like A Wormhole Filled With Crack
• Power Ranking The 8 Worst People To Appear In The Netflix Documentary ‘Tiger King’
• Legendary Wrestling Announcer Jim Ross Had One Of The Best Takes On Fellow Oklahoman Joe Exotic
• Donald Trump Jr. Gets Hilariously Mocked For Comparing His Dad To Convicted Felon Joe Exotic
• Granddaughter Of Carole Baskin’s Missing Husband Posts TikTok Thanking Joe Exotic For Trying To Kill Her
• Sheriff Says He’s Getting 6 Tips A Day About Carole Baskin’s Missing Husband, Says She Refused A Polygraph
• Carole Baskin’s Boyfriend After Her Husband Disappeared Also Filed For A Chilling Restraining Order Against Her
• Shaq Denies Being Friends With Joe Exotic, Facetimed Jeff Lowe Following The Release Of ‘Tiger King’
• ‘Tiger King’ Inspires Cops To Take Another Look Into The Disappearance Of Carole Baskin’s Husband
• Kate McKinnon Set To Play Carole Baskin In New Series Based On Story From Netflix Documentary ‘Tiger King’