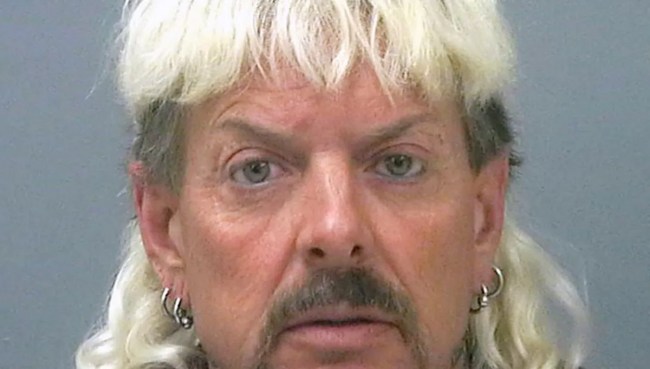 It’s been three months to the day since we reported that Tiger King star Joe Exotic claimed he would be dead inside of three months if he were forced to remain in prison and begged Cardi B and Kim Kardashian for help.

Turns out that wasn’t exactly true because, well, he’s still with us.

In fact, Exotic — real name Joe Maldonado-Passage — is so still with us that he’s got some new disturbing claims about his time in prison and recently submitted a 257 page document to President Donald Trump explaining why he should be pardoned in the midst of the 22-year sentence for his conviction on 17 federal charges of animal abuse and two counts of murder for hire.

TMZ reports Exotic also included a letter he sent to Donald Trump Jr. in which he claims, “I have been sexually assaulted by jail staff, beat up and tied in a chair to the point the skin came off my arms,” adding, “Please be my hero … my hands are damaged from the abuse in jail so I’m sorry for the soppy (sic) writing and spelling.”

He also added the hashtag #TrumpJr.2024, so you know the plea is genuine.

In his letter to President Trump, Exotic shared a similar message, writing, “Allow me to make you proud, to make America proud, to make the world proud. Be my hero please.”

According to OK! magazine, Exotic told them in a email, “I was sexually assaulted by a guard in Grady County (Oklahoma), beat the f**k up and stripped naked. I was tied in a chair (for) so long the skin came off my arms … and then locked in a room naked for eight days sleeping on a cold metal shelf on the floor with dried feces and sperm on it from so many others before me. There is no mental help there — it’s just abuse.”

Joe Exotic’s wacky team of supporters and lawyers will reportedly be flying to Washington to hand-deliver a copy of their official pardon request to the White House.

In the meantime as he waits for his pardon, he can just chill and watch the Animal Planet documentary called Surviving Joe Exotic and the upcoming series starring Kate McKinnon set to air on NBC, USA, and Peacock.