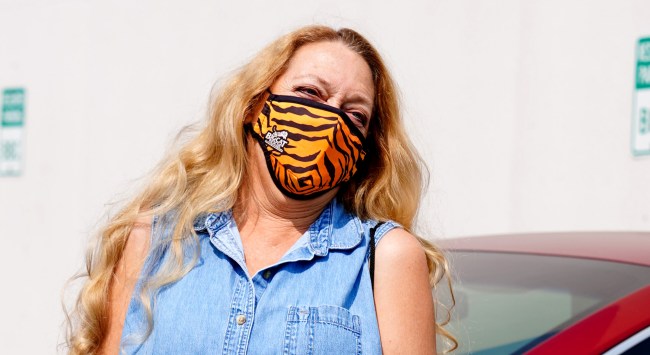 Forget Dogecoin, Tiger King star Carole Baskin is launching her own crypto coin that all the cool cats and kittens are going to be clamoring for now.

The best part? She has named it $CAT. As in what people call animal fecal droppings.

Do you think that was on purpose or is she just that clueless and hell-bent on getting the word CAT into the name of her crypto coin that she didn’t realize she named it after animal poop? She can’t be that dim, right?

According to a press release by Baskin’s Big Cat Rescue, $CAT “is not a currency for investment, but rather is a purr-ency of our fans to show their love for the cats.”

Baskin refers to $CAT as an “alt coin” or “creator coin” but says that unlike other animal themed tokens like Dogecoin (dog), TrueFlip (dolphin), Nyancoin (cat), Pandacoin (panda) and Neucoin (squirrel), “none of these represent a fanbase for a non profit sanctuary nor an organization dedicated to protecting animals.”

“I’m investigating crypto currencies because I am concerned about the volume of US dollars that are being printed and distributed with nothing to back them up,” says Baskin. “At this point both the USD and BitCoin are fiat currencies, but at least BitCoin and other altcoins have scarcity built in and now there is much more broad adoption of them in our everyday lives. I like the idea of putting the power of money in the hands of the people, rather than banks and governments. Our new $CAT coin is not a currency for investment, but rather is a purr-ency of our fans to show their love for the cats and to reap the benefits of being our most forward thinking partners in creating a world where all wild cats live free.”

$CAT coin is listed on Rally.io where it says, “Future plans include a big cat metaverse for virtual visits with the cats and each other based on $CAT holder’s possession of the coin and NFTs which are launching in about two weeks.”

$CAT holders *stifles laugh* currently receive “elite access to LIVE walkabouts and conversations with Carole Baskin and her crew of big cat lovers and keepers, discounts and first access to new merchandise and activities and so much more.”

$CAT currently sits at a price of around $16, but remember, “the value of the $CAT coin is not, in any way, an investment. Its only value is in the purr-ks of showing your pride in Big Cat Rescue.”