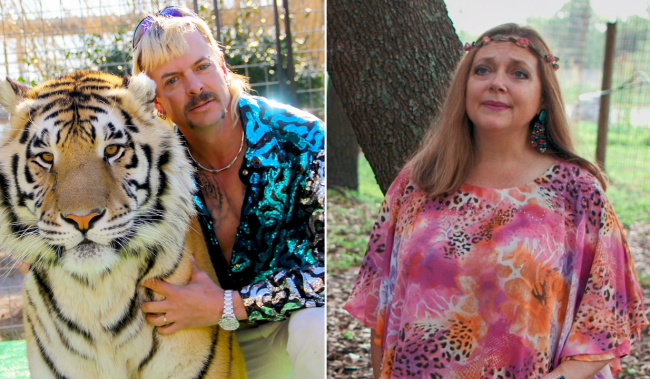 Tiger King star Joe Exotic is doing something that no one would have ever seen coming. He says he is willing to work with his bitter rival in the big cat game, Carole Baskin, in an effort to reduce his very lengthy prison sentence.

Exotic, real name Joseph Allen Maldonado-Passage, is currently serving a 22-year prison sentence over a plot to kill Baskin, as well as numerous counts of animal abuse, says he will work with the woman who he accused of murder in one of his many amazing music videos in order to hopefully reduce his time in jail.

In a new interview with Entertainment Tonight, the 58-year-old former “Tiger King” says thay he would accept an offer made recently by Baskin’s husband, Howard.

Speaking to the Mirror, Howard Baskin said, “If Joe were to come out and say, ‘I now know what I did was wrong and I want to help. I would like to support passage of the Big Cat Public Safety Act and stop this breeding.

“If he were to do that, it might position him in a positive way for a pardon. And frankly, I might be willing to go and urge at least a reduction in his sentence.”

Exotic says he has no problem doing that.

“It is time for Carole and Howard to put up or shut the hell up because I’m accepting their offer,” he told ET. “And I’m gonna take it one step further than that, Okay? It is time to get on the phone to President Biden or whoever they need to that they’ve got in their little financial pocket and say, ‘Hey, Joe is willing to support a big cat bill to help protect cats in America from being exploited. But we need to keep our end of the deal and get Joe a pardon because this wasn’t really about murder for hire or shooting five tigers — this was about exploiting Joe to support Carole’s agenda.’ So, there’s the offer on the table, all right?”

The Big Cat Public Safety Act was passed by the House of Representatives on Dec. 3, but Exotic doesn’t think it’s enough.

“The way it’s written is not gonna help anybody except PETA and Carole Baskin,” he says. “So, I’ll testify in front of the Senate, I’ll testify in front of the House, they want to end big cats in America and they want to end the exploitation of them, I’m the man to do it. But it’s time to get an attorney general down here and listen to the evidence that I have to prove I’m innocent and get me the hell out of here. And they’ve got my support. Other than that, they need to stay the hell out of the news with all their crap just to get their name in the paper because I just called their bluff.”

Baskin replied, “I wouldn’t seek a reduced sentence for Joe based upon him just saying he’d help end cub handling. I think he’d say anything, but not actually do it. He’d have to actually work with authorities to bring all of his buddies to justice and work with legislators to end cub handling. Then, I’d want him to be rewarded for having done the right thing.”

The Big Cat Rescue owner had previously told the Mirror that Exotic, if he wanted to, “could take all of this fame and become a hero who could save the tiger from extinction.

“We’re going to lose the tiger in the wild in the next few years if we don’t stop private possession that is creating this flood of cats into the illegal trade, which is a smokescreen for poaching in the wild. That is something he could do something with and get all the glory and fame he ever wanted and do a good thing.”

Seriously though, there has got to be a season two of this show, right?