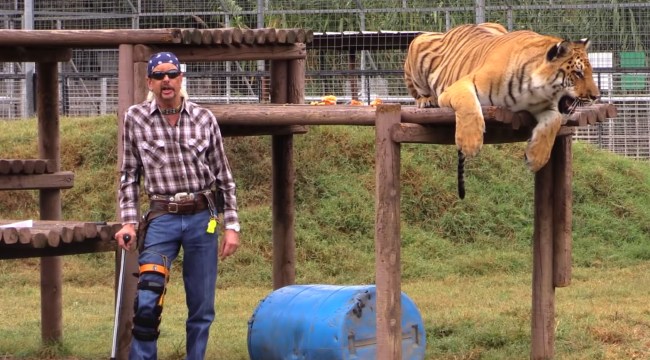 When is season 2 of Tiger King: Murder, Mayhem and Madness coming to Netflix? According to a couple of the original case members, it could be coming out very, very soon.

That’s right. In addition to the new documentary on the college admissions scandal starring Lori Loughlin and Felicity Huffman, Netflix could be releasing a second season of Tiger King in March as well.

Tiger King was confirmed by Netflix to have been watched by around 64 million users in its first four weeks when it came out. Since then, Netflix has reportedly secured the rights to a second season, so it’s been pretty much inevitable that it would happen, we just didn’t know when.

This week, the sleuths over at What’s on Netflix discovered that two people from season 1, zoo manager John Reinke and jet ski gawd James Garretson, have both mentioned a second season in videos they have shot for Cameo.

In one of the videos, Reinke, who has claimed he didn’t get paid squat for participating in the first season of Tiger King, says, “I want to thank you guys for watching Tiger King and get ready, yup, believe it or not, there’s another season gonna come out pretty soon so keep your eyes out for that.”

Meanwhile, Garretson has made several mentions of season 2 in his Cameo videos – even going so far as to speculate that it will be released in March or April 2021.

Considering Tiger King initially premiered on March 20th, 2020, a March/April 2021 release for season 2 would certainly make sense – unlike most of the cast of characters who will probably be appearing in it.