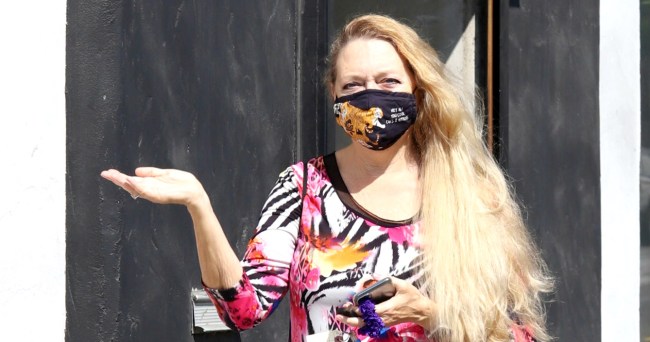 Can you believe that it’s been almost a year since Tiger King first aired on Netflix?

A lot has happened in that time. Jeff Lowe lost the zoo. Doc Antle was indicted on charges of animal cruelty and trafficking. Carole Baskin appeared on Dancing With the Stars. And Joe Exotic is still in prison – though he thinks he is getting out very soon.

Oh yeah, Baskin’s missing husband Don Lewis? He is still missing despite the best efforts of his friends and family.

However, should he ever resurface, Baskin tells the Telegraph that she’d be more than happy to care for Lewis for “the rest of his life.”

She also has a theory about what happened to him.

“Every time there’s a hurricane I think something will wash out of the Gulf that will prove the thing he was most likely doing at the time was the thing that would end up killing him,” said Baskin, meaning a plane crash.

“I really believe he was suffering mentally, so if he’s alive somewhere, he probably has absolutely no idea who he is. But if that were the case, I would take care of him for the rest of his life. I am happily married, but I always loved Don.’”

Baskin also says that she offered to take a lie detector test to confirm that she didn’t kill Lewis, despite what Tiger King claimed.

‘I offered! The only people I cared about knowing the truth were Don’s daughters. I was heading down there [to take the test] but my criminal attorney was like, “Absolutely not” – so I’ve not taken one since, because I don’t know where he is. I could pass the lie detector and be seen as a stone-cold killer with no emotions, or I could fail because I have emotions, and now I’m a stone-cold killer. There’s no way to win,’ she says.

These days, Baskin isn’t as worried about Joe Exotic sending someone to kill her, but that doesn’t mean she isn’t still taking precautions.

‘If I had been in danger prior to Joe being sent to jail, I think I have been in more danger since,’ she says, calmly. ‘As dangerous as he was, he’s the least dangerous of those guys.’

When she attends some events, she hires a bodyguard. ‘But around town I don’t… I do carry a gun, but my belief is [I] would probably never see it coming. I don’t think I’d be able to get to a gun in time.’

Just yesterday somebody flew a drone over her property, so she checked it wasn’t loaded with a grenade. ‘Because that was one thing Joe thought would be a great way to kill people, dropping a grenade from a helicopter. Every day is a matter of living like that.’

As for whether there will ever be a second season of Tiger King – one can only hope – Baskin is reportedly angling for a big payday in order for that to happen.

She says the pandemic has cost her $1 million in expected revenue, which has only partially been offset by the more than 2,700 videos she’s made for Cameo.