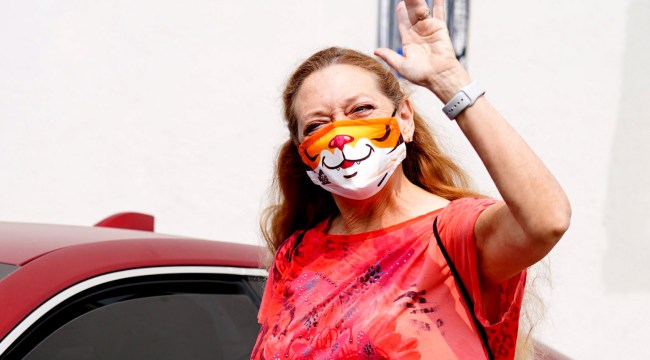 The family of Carole Baskin’s missing husband, Don Lewis, has filed a defamation lawsuit against her over comments she made on Dancing With The Stars.

The daughters of Don Lewis, Gale, Lynda and Donna, and his former assistant, Anne McQueen, are suing Carole for defamation, claiming, according to legal documents obtained by TMZ, Carole has been complicit with jokes about the death of Lewis on Dancing with the Stars.

Specifically, they cite jokes made by the show’s judges regarding TikTok videos inspired by Baskin’s portrayal in the Netflix Tiger King documentary.

Related: Carole Baskin Responds To The Ad The Family Of Her Missing Husband Aired On ‘Dancing With The Stars’

Don’s family is not only accusing Carole of being complicit with the Don quips on ‘DWTS,’ but also going along with the joke in an interview with “Good Morning America” when she promised to “really kill it next week” … according to the suit.

Baskin has responded to the lawsuit and accusations, telling TMZ, saying “it’s a stretch” to say she was referring to Don’s death when she uttered the phrase “killing it.”

She states it bluntly — she didn’t kill Don or have him killed, and says she believes he died in a plane crash over the gulf due to his failing mental capacity … so “there’s no way I’d associate losing him with that word or concept.”

Carole adds that any ‘Tiger King’ reference to killing or murder on ‘DWTS’ “is strictly based on the fact that so many animal abusers have tried unsuccessfully to kill me either by rallying their minions or hiring hitmen.”

Lewis’ lawyer at the time of his death has said that he believes Don was strangled and thrown out of a plane over the Gulf of Mexico.

Baskin also added something that has either never been mentioned before or has gone unnoticed when she told TMZ that two months before he went missing, Lewis was diagnosed as bipolar with altered mental states and she was the only one who attempted to get him proper mental health treatment.

Lewis’ family’s attorney, Jon Phillips, told Entertainment Tonight that this isn’t the first time Baskin has been sued by the family for making light of Don’s death.

He says Baskin settled a libel and slander claim made against her by McQueen in 1998 and ended up paying $50,000.

“These exact same false statements, and additional ones, are being made again in 2020,” said Phillips in a statement. “It is malicious. Making matters worse, Howard Baskin is making these same statements publicly, as is Big Cat Rescue. As such, they have been added as Defendants.”

Speaking to Entertainment Tonight, Phillips said, “Carole Baskin goes on YouTube, Facebook and does blogs every single day getting out her narrative. It’s landed her on a major TV show, Dancing with the Stars. She was the featured person in all the commercials and last to dance. All the messaging about Carole and her fame comes at their peril. There was Tiger King — and it focused on the exotic animal industry — but a lot of it was about the death and disappearance of Don Lewis. A lot of her contention with Joe Exotic was about whether she was involved in Don Lewis’ death.

“The family never really got the chance to know and years have gone by. Since Tiger King, Carole has done daily diary entries and was going to use this show as a springboard to her message. So [Lewis’ family] wanted their message out there. They wanted, at least locally, to counter message Carole Baskin’s, in their mind, lies and fraud.”

Baskin, as always, denies any wrongdoing or involvement in the death of Don Lewis.