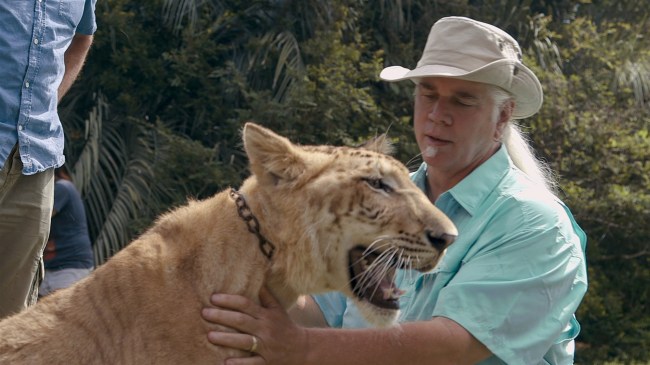 Stop me if you’ve heard this before but a grown man with a pony tail has been indicted on felony charges.

After a months-long investigation, the animal trainer popularized by Netflix’s Tiger King was indicted Thursday by a Frederick County grand jury on felony counts of wildlife trafficking and conspiracy, plus multiple misdemeanor counts of animal cruelty and conspiracy to violate the Endangered Species Act, the Chicago Tribune reports. Two of Antle’s daughters have also been indicted on charges of animal cruelty and violating the Endangered Species Act.

I told y’all Doc Antle from Tiger King was a con man animal abuser asshole who exploits animals and lies to patrons saying they are rescued. Fuck this guy. https://t.co/o8TGrzFUZU

The investigation found that Antle and an owner of a roadside zoo in Virginia trafficked lion cubs between Virginia and South Carolina.

In August 2019, 119 animals — including lions, tigers, bears, camels, goats, and water buffalo — were seized from Wilson’s roadside zoo after a judge found that Wilson “cruelly treated, neglected, or deprived” the animals of adequate care.

Wilson and his nephew were indicted in November on 46 counts of animal cruelty.

Don’t let this news distract you from the fact that Don Lewis is still missing and someone knows something.