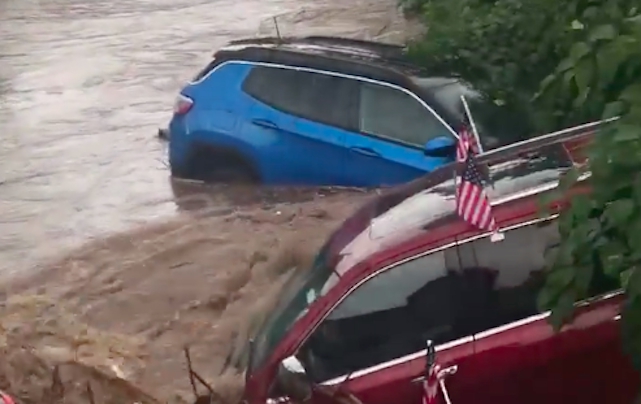 It was a particularly gloomy weekend in the Northeast, where the skies were filled with foreboding clouds and weather apps were littered with huge swathes of rainbow-colored radar.

Despite the less-than-agreeable conditions, I decided to tempt fate on Saturday by getting my brunch on and tested my luck even more by agreeing to take a seat outside because the dining room was full.

Things were going fine until around my second-and-a-half mimosa when virtually every phone in the vicinity started making the sound that means either a child has been abducted or you’re about to get your ass handed to you by the weather.

It turned out to be the latter, which was confirmed when the skies opened up and punished me for my hubris (and my stubborn refusal to abandon my policy of never using an umbrella) about two minutes after the initial alert.

Despite the warning, there wasn’t any serious flooding in my area, but the same can’t be said for others.

New Jersey seemed to take the brunt of the weather blow over the past couple of days and continues to deal with dangerously high water levels.

There’s no doubt plenty of people will have to deal with the fallout from the flooding but I’m not sure if anyone’s going to have a worse time picking up the pieces than whoever is in charge of the car dealership that had a significant chunk of its inventory sail down a river.

According to the New York Post, the video was taken near a Chrysler Jeep Dodge dealership in Little Falls.

As you can see, at least one of them came away slightly worse for the wear.

One of the vehicles that floated away from the Little Falls dealership where it finally came to a stop in the Peckman River @ABC7NY pic.twitter.com/9N4t4zwsI7

Despite the extent of the damage, the dealership has somehow managed to tow the cars out of the water— a task that was made even harder because they were filled with mud and rocks they’d collected on their journey.

That should be a fun insurance claim to file.