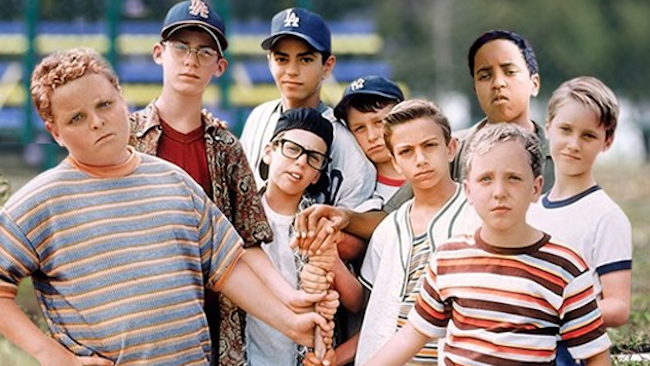 Want to feel old? April 1st marked the 25th anniversary of The Sandlot. On Saturday, the Los Angeles Dodgers celebrated the iconic baseball/childhood movie by having a reunion of the stars of the 1993 film. The movie’s director/writer David Mickey Evans, Yeah-Yeah, Repeat, Smalls, Squints, Ham, and the gang donned customized Dodgers jerseys and greeted the crowd at Dodger Stadium before the game against the San Francisco Giants.

I’m sure after 25 years, Patrick Renna AKA is totally not tired of people asking him to say, “You’re killin’ me Smalls.”

There was Sandlot-inspired Dodgers t-shirts and the beloved childhood movie was played for fans after the game.

It’s The Sandlot 25th Anniversary and the cast of the movie will be here to throw the first pitch!
AND it’s movie night at Dodger Stadium so the movie will play after the game⚾️
This is today’s ticket package shirt😍 pic.twitter.com/1jvYwseE5J

Noticeably missing was Benny “The Jet” Rodriquez. Again. Michael Vitar, who played Benny in the iconic movie, is now a Los Angeles firefighter. Is it because he may have allegedly punched Ham during the filming of The Sandlot? Vitar might be taking a low profile after being arrested on Halloween of 2015 for beating up a man so severely that the victim claims they have permanent brain damage.

If you missed this Sandlot reunion, you’ve still got a chance to see some of the cast in Miami for the Marlins-Phillies game on Sunday, July 15. Fans will have a chance to get Ham and Squints bobbleheads, despite quantities being limited, this is a Marlins game so you’ve got to like your chances at snagging one of these Sandlot bobbleheads.